Update Required To play the media you will need to either update your browser to a recent version or update your Flash plugin.
By Jonathan Evans
02 May 2020


The working conditions for news reporters around the world have worsened during the coronavirus pandemic. The finding comes from recent research published by the International Federation of Journalists (IFJ).

About 1,300 reporters, or journalists, in 77 countries answered questions from the IFJ. Three out of four of them said they faced restrictions, threats or other difficulties while reporting on the COVID-19 crisis.

Two-thirds of those questioned said they have experienced worsening working conditions, including decreased pay and job losses. 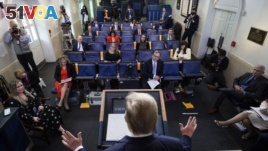 Reporters are seen complying with social distancing norms as President Donald Trump speaks about the coronavirus in the James Brady Press Briefing Room at the White House, April 13, 2020, in Washington.

Anthony Bellanger is the IFJ general secretary. He said, "These results show a worrying trend of declining media freedom and cuts to journalism at the very time when access to information and quality journalism is so crucial."

He added, "Journalism is a public good and it deserves public support."

Almost every independent journalist reported wage or job losses in the April survey. More than half said they have also suffered mental health problems like stress and anxiety.

The IFJ said more than 25 percent of those questioned said they lack the right equipment to work at home as ordered by their governments. Another 25 percent said they lacked personal protective equipment for working in the field.

The IFJ report also said, "When asked about the state of media freedom in their countries the vast majority said it had got worse."

The group noted that many reporters have been arrested or faced legal action since the virus began to spread.

Almost one in four journalists said they have struggled to get information from their government or official sources. Many criticized restrictions on free movement or on asking questions during press conferences.

The IFJ said, "From Greece to Indonesia and from Chad to Peru, journalists used words such as precarious, problematic, terrible, worse, declining and restricted" to describe the current media freedom environment.

Samuel Petraquin reported on this story for the Associated Press. Jonathan Evans adapted this story for Learning English. Caty Weaver was the editor.

access –n. the right or ability to approach, enter, or use

declining – adj. of or relating to the period during which something is deteriorating or nearing its end