Update Required To play the media you will need to either update your browser to a recent version or update your Flash plugin.
By Bryan Lynn
31 October, 2018


The man accused of killing 11 people at a synagogue in Pittsburgh reportedly left messages on a small social media service.

The suspect, Robert Bowers, was charged with 29 crimes, including hate crimes, related to the attack at the Tree of Life synagogue in Pittsburgh, Pennsylvania. The attack on the Jewish religious center also injured at least six others, including four police officers.

On the morning of the shooting, a person using the name of Robert Bowers posted an anti-Semitic message on a social media service called Gab. The message targeted a Jewish nonprofit group called HIAS. The group seeks to help refugees around the world.

The message said: "HIAS likes to bring invaders in that kill our people." The post continued, "I can't sit by and watch my people get slaughtered...I'm going in." 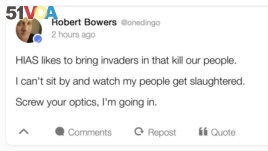 This image shows a portion of an archived webpage from the social media website Gab, with a Saturday, Oct. 27, 2018 posting by Pittsburgh synagogue shooting suspect Robert Bowers. (AP Photo)

Officials said Bowers called out "All Jews must die," before he fired at people inside the synagogue.

The Southern Poverty Law Center is a nonprofit civil rights group. It said an examination of the suspect's social media activity on Gab showed he had posted or reposted content at least 68 times. It said the postings often dealt with "numerous anti-Semitic conspiracy theories" long publicized by neo-Nazi and white nationalist groups.

By Monday, Gab was no longer available on the internet after several companies supporting the site cut off services for policy violations.

The Gab service was launched in 2016 by Andrew Torba. He said his purpose was to provide another social media choice for people facing restrictions by other services.

The site gained popularity as Twitter and Facebook sought to ban members of a movement known as the "alt-right." The alt-right is a far-right movement that publicizes extreme ideas -- mainly on the internet.

Twitter, Facebook and other social media have said bans are carried out when users violate policies against hate speech or threats of violence, not because of their political views.

On its Twitter page, Gab describes itself as "built, owned and funded by The People, with a mission to defend individual liberty and free expression online." The service lets users read and write messages called "gabs."

The company that hosted the site, GoDaddy, said it decided to end its service because Gab had violated a policy against promoting violence. Payment company PayPal also banned Gab from using its services. Apple and Google blocked app sales of Gab for violating hate speech policies.

In an interview published Tuesday on the internet, Torba said he was "horrified" when he learned the shooting suspect had used Gab. He said Bowers clearly violated a company policy that bans "threats of violence and terrorism." But Torba said he did not know about Bowers or his postings until after the attack.

Torba said his company had fully cooperated with U.S. law enforcement officials since the attack "to bring justice to an alleged terrorist." He added, "Because of the data we provided, they now have plenty of evidence for their case."

In a statement, Torba called the actions against his site and new criticism after the Pittsburgh shooting unfair. He says the site simply aims to "defend free expression" for all individuals.

"Social media often brings out the best and the worst of humanity," his statement said. He added that he was working to find new partner companies to support the service so it can return to the internet.

Other sites known to be popular with alt-right groups are 4chan and Reddit. These sites both have areas where members can read and post political views.

Oren Segal is the director of the Anti-Defamation League's Center on Extremism. He told Yahoo News his organization has already observed internet discussions among extremists about what will happen if Gab goes away forever. He said it is highly likely that another service sharing Gab's views on uncensored speech would take over.

"This is the beginning of this discussion," Segal said. "Gab being taken down is not the end."

Bryan Lynn wrote this story for VOA Learning English, based on reports from the Associated Press, Reuters and other online sources. Mario Ritter was the editor.

synagogue – n. the house of worship and communal center of a Jewish congregation

slaughter – v. to kill a lot of people in a cruel way

conspiracy theory – n. a belief that an event or situation is the result of a secret plan made by powerful people

liberty – n. the freedom to live, work and travel as you desire

promote – v. encourage something to happen or develop

alleged – adj. accused of something not yet legally proven

plenty – adj. a lot of something