Update Required To play the media you will need to either update your browser to a recent version or update your Flash plugin.
By Jill Robbins
20 August 2021


The Taliban urged local religious leaders to push a message of unity at Friday's prayers. But reports of targeted killings increased fears that the militants will return Afghanistan to their past repressive rule.

Fearful that the new rulers would carry out such abuses, thousands of Afghans have raced to Kabul's airport and border crossings to flee the country. Others have protested around the country and were met with violence.

The Taliban say they have become more moderate since they last ruled Afghanistan in the 1990s. They have promised to restore security and forgive those who fought them in the 20 years since a U.S.-led invasion. Ahead of Friday prayers, the militants asked religious leaders to call for unity and urge people not to flee the country.

But many Afghans are doubtful, fearing that the Taliban will take away the progress, especially for women, made in the past twenty years. An Amnesty International report provided more evidence Friday that weakened the Taliban's claims. 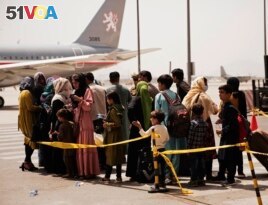 In this photo provided by the U.S. Marine Corps, civilians prepare to board a plane during an evacuation at Hamid Karzai International Airport, Kabul, Afghanistan, Wednesday, Aug. 18, 2021.

Reminders of the past record

The rights group said its researchers spoke to eyewitnesses in Ghazni province. They said the Taliban killed nine ethnic Hazara men in the village of Mundarakht on July 4-6. The report said six of the men were shot, and three were tortured to death.

Hazaras are Shiite Muslims who were previously persecuted by the Taliban. The group has made major gains in education and social standing in recent years.

Agnes Callamard is the head of Amnesty International. She said the killings were "a reminder of the Taliban's past record" and showed "what Taliban rule may bring."

The rights group warned that many more killings may have gone unreported. The Taliban have cut phone services in many areas to prevent images from being published.

Media workers are in serious danger

Separately, Reporters without Borders said media workers in Afghanistan are in extreme danger. The group issued the warning after Taliban fighters killed the family member of an Afghan reporter working for German broadcaster Deutsche Welle on Wednesday.

A Norway-based private intelligence group also said it has evidence that the Taliban have rounded up Afghans who worked with the previous Afghan administration or with U.S.-led forces.

Trying to get out

Mohammad Naim was among the crowd at Kabul's airport for four days trying to escape. He said he had to put his children on top of a car on the first day to save them from being crushed by the mass of people. He saw other children killed who were unable to get out of the way.

Naim said he had been an interpreter for U.S. forces. He urged others not to come to the airport. "It is a very, very crazy situation right now and I hope the situation gets better because I saw kids dying, it is very terrible," he said.

The United States is struggling to increase the number of flights it is running from Afghanistan, where thousands of Americans and their Afghan allies need to leave the country.

European countries are also working to bring their citizens and Afghan allies out. But continued disorder at the airport has made it difficult to organize the flights. A Spanish official said Friday that its military transport planes are leaving Kabul partly empty.

Getting to the airport is also a major problem. Germany was sending two helicopters to Kabul to help bring small numbers of people from elsewhere in the city to the airport, officials said.

As concerns rise about what a Taliban government will look like, the group's leaders are meeting with some officials from previous Afghan administrations. An Afghan official familiar with those talks told the Associated Press there would be no results from them before the last U.S. troops leave, currently planned for Aug. 31.

Ahmad Seir, Tameem Akhgar and David Rising reported on this story for the Associated Press. Jill Robbins adapted it for Learning English. Hai Do was the editor.

restore – v. to give back (someone or something that was lost or taken)

doubtful – adj. uncertain or unsure about something

persecute – v. to treat (someone) cruelly or unfairly especially because of race, affiliation or religious or political beliefs

interpreter – n. a person who translates the words that someone is speaking into a different language

flight – n. a journey on an airplane

What do you think of the news reports on the Taliban's actions? We want to hear from you. Write to us in the Comments Section.