Reports Suggest Many Have Coronavirus with No Symptoms

Update Required To play the media you will need to either update your browser to a recent version or update your Flash plugin.
By Susan Shand
20 April 2020


New research suggests that many people have had the coronavirus without any symptoms of it. If confirmed, experts hope that the virus will be much less deadly than they feared.

It also means, however, that it is impossible to know who may be contagious. That would complicate decisions on when return to work or to school.

Over the past week, reports of infections without symptoms have come from a homeless shelter in Massachusetts and pregnant women at a New York hospital. Other "silent" infections were reported in California, several European countries and even on a United States Navy aircraft carrier. 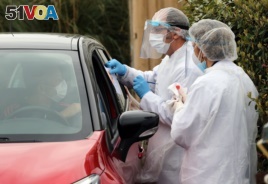 Medical staff test a person in their car with COVID-19 symptoms, at a drive-through testing site outside a medical biology laboratory in Anglet, southwestern France, Monday, April 20, 2020. (AP Photo/Bob Edme)

The head of the U.S. Centers for Disease Control and Prevention says 25 percent of infected people might not have symptoms of the virus. The vice chairman of the Joint Chiefs of Staff, General John Hyten, thinks the rate may be as high as 60 to 70 percent among armed forces members.

None of these numbers can be fully trusted because they are based on incomplete testing, said Michael Mina. He is a doctor with the Harvard University School of Public Health. He added that the numbers suggest "we have just been off...by huge, huge numbers" for estimating total infections.

Worldwide, tests have confirmed more than 2.3 million coronavirus infections and more than 160,000 deaths. The virus has caused large economic and social harm since its existence was reported in early January.

Based on known cases, health officials have said the virus usually causes mild or moderate health problems similar to influenza. They include feeling tired and a higher than normal body temperature. Patients may also report having a dry cough.

Now evidence is growing that a great number of people may have no symptoms at all.

Scientists in Iceland tested six percent of the country's population to see how many were infected without showing any symptoms. They found that about 0.7 percent tested positive for the virus. So did 13 percent of a group at higher risk because of recent travel or being in contact with someone sick.

On the aircraft carrier USS Theodore Roosevelt, one crew member died from the virus. Vice Admiral Phillip Sawyer, deputy commander of naval operations, reported that 40 percent of the crew members are symptomatic. The percentage may increase if more develop symptoms later, he warned.

In New York, a hospital tested pregnant women coming in to give birth over a two-week period. Nearly 14 percent of those woman had the coronavirus, but no symptoms. Some developed symptoms later.

Nearly 50 percent of the people on the Diamond Princess cruise ship had coronavirus, but no symptoms. Researchers now estimate that 18 percent of those infected never developed symptoms.

All these studies used tests that are problematic. Some involved throat and nose swabs that can miss the virus.

Symptoms may not appear when someone is tested but turn up later. One Japanese study found that more than 50 percent of those who had no symptoms when they tested positive later felt sick.

Better answers may come from newer exams that test blood for antibodies.The body's natural defenses against disease produce antibodies to fight the virus. But it is still unclear if these tests can be trusted.

On Friday, researchers reported results from antibody tests on 3,300 people in Santa Clara county, California. They said that between 1.5 percent and 2.8 percent have been infected. That would mean 48,000 to 81,000 cases in the county, which is more than 50 times the number that have been confirmed.

These studies have yet to be published, and some scientists question the information. Those tested answered social media advertisements, which means they may have believed they already had the virus and wanted a test.

Antibody testing needs to be done in a methodical way, Mina said.

The CDC and other groups are planning such studies. They could help with the process of returning to normal life.

If the virus is widespread and there are many people without symptoms, it is possible that some have developed a level of immunity. That could stop the spread. But scientists warn that a lot more research is needed.

symptom – n. an indicator that one is sick

contagious – adj. an illness that can be passed from one person to another

positive – adj. an outcome that indicates an affirmative

swab – n. a small piece of cotton or clothe