Republican, Democratic Conventions Could Be Exciting

Update Required To play the media you will need to either update your browser to a recent version or update your Flash plugin.
By VOA
10 July, 2016


On July 18th, Republicans begin a four-day meeting in Cleveland, Ohio, to choose their party's candidate for president.

These two conventions are likely to get more public attention than any in the past 40 years. 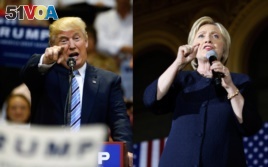 Not much doubt about Trump and Clinton

An effort by "Never Trump Republicans" to deny him the nomination faces long odds. "I think everybody understands that they lack the kind of support to pull off what they started out to do," Bruce Ash told CNN. He is a member of the Republican convention rules committee.

And, if as expected the "dump Trump effort fails," Hatemi said people will watch to see "what kind of speech" he gives.

Trump, who is running his first campaign for elected office, generally does not read prepared speeches. He mostly says what he thinks. Trump also uses colorful language and almost always promises to "make America great again."

For the Democratic convention, Hatemi said people will watch to see if Clinton can win over loyal supporters of Bernie Sanders, the Vermont senator.

Sanders delegate not sure he will support Clinton

"I can honestly say that I don't know if I'll vote for Hillary Clinton," said Shane Assadzandi, 27, of West Virginia, and a Sanders delegate. It will be his first national political convention.

Assadzandi said he knows he will vote in November and that "it won't be for Trump." But he has "doubts" about Clinton's position on issues important to him, such as campaign finance reform.

"I volunteered for Bernie for the better part of a year now," Assadzandi said. "He really walked the talk and really spoke to our concerns on the issues we care about most." By "walk the talk," he means somebody whose beliefs and actions matched his speeches.

A strong endorsement from Sanders might persuade him, he said. Sanders confirmed reports he will endorse Clinton before the Democratic convention.

In Cleveland, Gary Lavine will attend his 11th Republican convention.

Lavine, an attorney in Syracuse, New York, said the Cleveland convention will be among the most important he attended. Trump needs to have a successful convention to win the presidency, he said.

"Trump has to persuade people he is a serious candidate," said Lavine, who supported former Florida Governor Jeb Bush for the Republican nomination.

"Trump has to roll out a solid running mate [his vice presidential candidate] and deliver a speech that says he will take care of our nation and government and this isn't just, well, another casino deal," Lavine said.

Coming out of the convention with unity is important for both candidates, said Casey Dominguez, a political science professor at the University of San Diego in California.

"History seems to indicate that a divisive convention can hurt the party's standing going into the general election," Dominguez said.

The 1976 Republican and 1980 Democratic conventions were the last to have serious fights for party nominations.

At the 1976 Republican convention, Gerald Ford defeated Ronald Reagan for the nomination. But he lost the 1976 presidential election to Democrat Jimmy Carter.

In 1980, Carter blocked a strong challenge from Ted Kennedy for the Democratic nomination. But he went on to lose the 1980 election to Ronald Reagan.

Both candidates have high negatives

Ahead of the 2016 Republican and Democratic conventions, a majority of voters have negative views of both Trump and Clinton, said Hatemi of Penn State University.

The conventions will give them a chance to improve their standing with voters, he said.

Trump drew new criticism last week for praising the late Iraqi leader Saddam Hussein. He said Saddam was a "very bad guy," but very good at killing terrorists "and this was a good thing."

And the U.S. FBI director criticized Clinton for using a private email server as secretary of state. James Comey, the director, said Clinton and her aides were "extremely careless in their handling of very sensitive, highly classified information." But he added, "No charges are appropriate in this case."

What goes on at a political convention?

At the conventions, there will be speeches from people saying nice things about their candidate and bad things about the opposing candidate. Trump has said he will try to build excitement with music and unusual speakers, such as sports' stars and entertainers.

"These political conventions play a very important part in our democracy. They build unity and enthusiasm for candidates," said Lavine, who attended his first Republican convention in 1968.

Angela Gialloreto has been to every Democratic convention since 1976, when Jimmy Carter was nominated.

"Conventions create enthusiasm and makes me feel so good that someone I believe in is willing to take the presidency and all the challenges that go with it," she said. "It makes you feel like you really and truly are part of a great country."

Bruce Alpert reported this story for VOA Learning English. Hai Do was the editor.

establishment -- n. the people in business, government, etc., who have power over the other people in a society

endorsement -- n. to say someone supports a person for office or some other contest

mate -- n. a person who works alongside someone

deliver -- v. to say something in public

sensitive -- adj. needing to be handled in a careful or secret way in order to protect someone or something

classified -- adj. kept secret from all but a few people in the government

enthusiasm -- n. strong excitement about something