Update Required To play the media you will need to either update your browser to a recent version or update your Flash plugin.
By VOA
19 July, 2017


A majority of Republicans and Republican-leaning voters say American colleges and universities have a negative effect on the United States.

That is one of the findings of a new report by the Pew Research Center. The report was based on phone interviews with more than 2,500 adults across the United States and the District of Columbia.

Over the past two years, Pew found the share of Republicans and Republican leaners who view the effect of colleges and universities positively has dropped 18 percentage points. In the past, a little more than half had a positive view. Now only about one-third do.

Some of the opinions about the value of college differ based on age.

A former Republican congressman from Louisiana, Billy Tauzin, said he believes many Republicans are unhappy that at some colleges conservative speakers are not only unwelcome, but blocked from speaking. 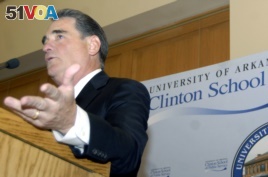 This year some students at the University of California - Berkeley and Middlebury College in Vermont demonstrated violently against conservative speakers. The demonstrations drew wide coverage and criticism by news media favored by conservatives.

David Andersen, who teaches political science at Iowa State University, said he is not surprised Republicans and Republican-leaning adults have a negative opinion of American higher education.

"One of the things going on is that there is an anti-elitism and anti-intellectualism among some in the Republican Party," Andersen said.

Andersen said he sees distrust in his own classroom among students from largely Republican and conservative communities in Iowa.

"Students are very willing to push back as we discuss issues," he said. "But that's the whole point of being at a university. Let's talk about what you believe and see how it matches up with the facts."

On some issues, such as climate change, Andersen offers information about the big majority of scientists who say climate change is real and caused by man-made activities.

When they get home, some students talk with their families about classroom discussions that conflict with the ones at home.

Sometimes, those conversations do not go well.

"One student said, ‘My uncle yelled at me for two hours because he thought I had become a godless liberal,'" Andersen said.

Andersen said he believes most Americans without a college education still want their children to go to college, hoping they will gain better job opportunities.

William Eveland Jr., a professor at the School of Communication and the Department of Political Science at Ohio State University, said there may be other reasons Republicans do not favor colleges and universities. One of them is the increased cost of college, and the increasing number of students and parents who go into heavy debt to pay off loans.

College is still preferred over the media

The Pew Research Center report found Republicans have an even worse opinion of the news media than they do of American colleges. Pew found 85 percent of Republicans and people who lean Republican say the news media has a negative effect on the United States.

leaning - n. a preference for something or tendency to do something

match - v. to go well with something or someone

yell - v. to say something very loudly especially because you are angry, surprised, or are trying to get someone's attention