Update Required To play the media you will need to either update your browser to a recent version or update your Flash plugin.
By Ashley Thompson
02 July, 2018

Thai officials say rescue workers have found all 12 boys and their soccer coach alive deep inside a partly flooded cave.

The group went missing on June 23 after they completed soccer practice. The team then apparently went off to explore the Tham Luang cave, near Thailand's border with Myanmar.

Other than personal belongings left at the opening to the cave passage and hand prints on the walls, there had been no sign of the group. 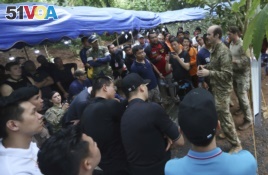 Members of the U.S. Special Operations Command Pacific Search and Rescue team meet with rescue teams from China, Thailand and Australia as they plan a search operation in northern Thiland, July 2, 2018. (AP Photo)

For the past nine days, rescue teams have battled through thick dirt and high water to try to find the boys and their coach. The cave follows a series of underground passages for 10 kilometers into a mountain.

The governor of Chiang Rai province, Narongsak Osatanakorn, confirmed late Monday that the team was in the process of being rescued. But he added that they were not out of danger yet.

"We found them safe. But the operation isn't over," he said in comments broadcast across Thailand.

Rescue divers had spent much of Monday making preparations for a final push to find the boys, aged 11 to 16, and the 25-year-old coach.

Family members of the missing hugged each other as they cheered the latest news. Many of them had been putting fruit and sweet treats near the cave each day as an offering to spirits they believe protect the cave.

Aisha Wiboonrungrueng, the mother of one of the boys, smiled and hugged family members. She said she would cook her son a Thai fried egg dish, his favorite food, when he returns home.

More than 1,000 people have worked on the rescue operation, including Thai navy SEAL divers and others from across Thailand. Australia, the United States, China, Myanmar and Laos and other countries also have sent specialists to the cave.

Anmar Mirza, a leading American cave rescue expert, told the Associated Press that many risks remain for the rescuers and the group. He said rescuers must still decide whether to try to get the team out of the cave or to instead provide them with survival supplies until water levels go down.

He described taking non-divers through a cave as "one of the most dangerous situations possible, even if the dives are relatively easy."

"The Royal Thai Government and the Thai people are grateful for this support and cooperation, and we all wish the team a safe and speedy recovery," Prayuth's office said in a statement.

Early Tuesday, the Thai navy released a video that showed the boys sitting on a dry area inside the cave. They are seen wearing the same clothing they had on the morning they disappeared.

One of the rescuers says to them, in English, ‘You are very strong." One of the boys asked what day it was. A rescuer answered, "Monday. You have been here -- 10 days."

Ashley Thompson adapted this article based on reports by the Associated Press and the Reuters news agency. George Grow was the editor.

cave - n. a large hole that was formed by natural processes in the side of a cliff or hill or under the ground

hug - v. to put your arms around someone or something as a way of showing love or friendship

passageway - n. a long, narrow space that connects one place to another