Update Required To play the media you will need to either update your browser to a recent version or update your Flash plugin.
By Christopher Jones-Cruise
18 April, 2016

In Ecuador, officials say at least 350 people died and more than 2,500 were injured in an earthquake that struck the coastal area late Saturday. 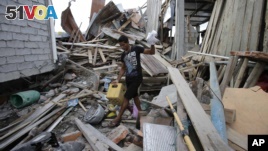 A man whose pregnant wife was killed during an earthquake Saturday, gathers things from his collapsed home, in La Chorrera, Ecuador, April 18, 2016.

Rescuers are digging with their hands and tools to find survivors under collapsed buildings. Soldiers have been deployed to areas hit by the earthquakes.

President Rafael Correa visited the coastal city of Manta, where the earthquake caused much damage. He said the earthquake was the worst natural disaster in his country since 1949, when thousands of people died in an earthquake.

In Japan, the U.S. military is helping Japan recover from three powerful earthquakes there. At least 41 people were killed in southern Japan on the large island of Kyushu.

Officials said as many as 100 people were trapped under collapsed buildings in Kumamoto Prefecture.

In addition to the dead and the missing, almost 2,000 people have been hurt since the first earthquake struck Thursday. Buildings collapsed. Fires and landslides occurred. Two stronger quakes struck on Friday and Saturday.

On Sunday, the Japanese government sent 25,000 Self Defense Force troops to help people on Kyushu.

Officials say many people are trapped or buried under collapsed buildings or homes. About 200,000 people are in evacuation centers at schools and government buildings.

Officials will not have complete damage reports until all communities are reached.

Dangerous aftershocks often happen after large earthquakes. Experts say they will be felt in southern Japan for more than a week. There have been more than 450 aftershocks since Thursday.

"There is no connection between the earthquakes" in Japan and Ecuador, says Gavin Hayes, PhD, a research geophysicist with the U.S. Geological Survey in Golden, Colorado.

"Earthquakes are random," he says, and sometimes they happen around the same time. These recent ones are not connected, he says.

What Japan and Ecuador do have in common is that they are both part of what is called the "ring of fire." That is the area around the edges of the Pacific Ocean, like coastal Asia and coastal North and South America. According to the U.S. Geological Survey, 90 percent of the world's earthquakes happen there.

Earthquakes happen when the "plates" — or the crust and upper layer of the earth -- move against each other. When they shift, it causes the earth to shake and shudder, moving energy along the lines of the plates. These lines are called faults.

Hayes says earthquakes are not increasing or getting worse than in the past. What is different is word spreads more quickly now.

"We are in a situation now that everyone is in tune with the Internet and media... and we're hearing more about (earthquakes) than in the past."

With Twitter and other social media, Hayes says, people can post pictures and information immediately after an earthquake.

aftershock – n. a smaller earthquake that takes place after a larger one

landslide – n. a large mass of rocks and earth that suddenly and quickly moves down the side of a mountain or hill