Update Required To play the media you will need to either update your browser to a recent version or update your Flash plugin.
By Jeri Watson
11 November, 2014


Efforts to stop illegal trade of endangered animals are gaining strength in some areas, including Southeast Asia. But now, officials must decide what to do with the thousands of animals rescued every year.

This issue is evident at the Phnom Tamao Wildlife Rescue Center, not far from Phnom Penh in Cambodia.

Gibbons – a kind of ape – call across the 2,400 hectares of protected forest. Their voices sometimes can be heard joining with those of rare birds and other endangered animals. 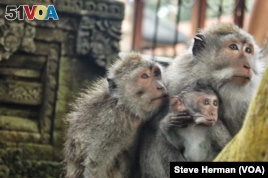 A family of long-tailed macaques at the Sacred Monkey Forest Sanctuary in Ubud, Bali, Indonesia.

Many of the animals arrived at the rescue center after being seized by Cambodia's Wildlife Rapid Rescue Team. The team includes Cambodian government officials and military police. Other help comes from the Wildlife Alliance, a non-profit group based in the United States.

Every year the team rescues hundreds of endangered animals. Cambodians help to make these rescues possible by calling a special telephone hotline.

A huge amount of money is exchanged in the illegal trade of animals. It is the world's third largest black market, after sales of arms and drugs. Well organized criminal groups and corrupt or uncaring officials remove species from the wild faster than they can reproduce.

The Phnom Tamao Rescue Center is home to about 100 sun bears. That is the largest population of sun bears in captivity. A number of moon bears also live there.

One expert says the whole protected area would support only a single bear in the wild. That is the opinion of Anuradha Jayasinghe, technical adviser with a group called Free the Bears.Two bears were set free after they regained their health over time in another part of the country. They did well for about three months. But then:

"They both got snared again by poachers. So that's the main issue in Cambodia is the hunting. It's just the forests aren't safe at the moment for releasing bears. And in the forests which probably, we might be able to ((release animals)) are full of mines."

More than 2,000 rare turtles were returned to their native wild home in Indonesia in February. These creatures were taken from wildlife traffickers. They had been seized a month earlier in Hong Kong.

Pangolins are often called scaly anteaters. They are sometimes hunted for food and medicine. Those abilities have led them to become the most often seized mammal in Asia's wildlife trade. The Worldwatch Institute says that has caused a great loss of their populations in Cambodia, Vietnam and Laos.

captivity – n. the state of being kept in a place (such as a prison or a cage)and not being able to leave or be free

smugglers – n. people who secretly or illegally move someone or something from one country to another

mammal – n. any of a class of warm-blooded higher vertebrates that feed their young with milk from mammary glands. They have skin more or less covered with hair. Humans are included.

Now it's your turn to use the Words in This Story. In the comments section, write a sentence using one of these words and we will provide feedback on your use of vocabulary and grammar.