Update Required To play the media you will need to either update your browser to a recent version or update your Flash plugin.
By Mario Ritter Jr.
28 June 2021


Rescue workers still hope to find survivors of the collapse of a large condominium building on an island community near Miami, Florida, on Thursday.

Families of the missing have taken buses to an area nearby to watch the rescue effort, which includes using heavy equipment such as cranes. Rescue workers are using dogs and high technology devices in an effort to find people trapped in the wreckage and concrete. But, the search has been slowed by rain and a fire. 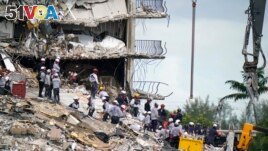 Rescue workers search in the rubble at the Champlain Towers South condominium, Monday, June 28, 2021, in the Surfside area of Miami. (AP Photo/Lynne Sladky)

"We have over 80 rescuers at a time that are breaching the walls that collapsed," said Andy Alvarez on national television. He is a commander with Miami-Dade Fire Rescue. He said workers are looking in spaces left by the collapsed floors and walls.

"We have been able to tunnel through the building. This is a frantic search to seek that hope, that miracle, to see who we can bring out of this building alive."

Alfredo Lopez lived with his wife on the sixth floor of the building. They escaped. But he said it was hard to believe that anyone could have survived the collapse.

"If you saw what I saw: nothingness. And then, you go over there and you see, like, all the rubble. How can somebody survive that?" Lopez told the Associated Press.

Rescuers are using tools such as a microwave radar device developed by NASA's Jet Propulsion Laboratory and the Department of Homeland Security. The chief of the company that sells the device said it is able to "see" through up to 20 centimeters of solid concrete. It can also listen for human breathing and heartbeats.

The collapse happened days before people living in the building were to start making payments toward a $9 million repair project. Three years earlier, a report had warned of major structural damage to the building which is in the island town of Surfside.

Six to eight teams are searching the partially collapsed building at any given time. Hundreds of people are involved in the effort which started on Thursday and has not stopped since.

Earl Tilton is a search-and-rescue expert from North Carolina. He warned that moving too fast without careful planning can be very dangerous for rescuers.

"Moving the wrong piece of debris at the wrong time could cause it to fall" endangering workers, he said.

Tilton added that there was still hope of finding people alive. He said rescuers have found survivors up to one week after a disaster.

Terry Spence and Russ Bynum reported this story for the Associated Press. Mario Ritter Jr. adapted it for VOA Learning English. Susan Shand was the editor.

condominium –n. a set of rooms in a building that are owned by the people who live there

breach – v. to make a hole or opening in

tunnel –v. to dig through something and making a tunnel, or passageway, in the process

miracle –n. a very amazing or unusual event, one that is believed to be caused by the power of God

rubble –n. broken pieces of stone, brick or materials from walls or buildings that have fallen