Update Required To play the media you will need to either update your browser to a recent version or update your Flash plugin.
By Jonathan Evans
23 May 2021


Matt Kauffman is a wildlife researcher at the University of Wyoming. He leads the Wyoming Migration Initiative, which studies the migratory paths of animals like deer and elk in the American state of Wyoming.

In 2019, Kauffman and other scientists were talking at a conference in Italy. He began thinking that wildlife around the world had the same difficulties faced by Wyoming's migratory deer and elk.

"We just spontaneously got together, nine or 10 of us who work on migrations around the world," Kauffman told the Jackson Hole News & Guide. "We realized that a lot of the same things we were trying to address by mapping migrations in Wyoming were applicable globally."

Their talk in 2019 was the beginning of an international effort that now includes 92 scientists and environmentalists. Their effort is called the Global Initiative on Ungulate Migration. Ungulates are animals with hoofed feet, like deer and elk.

The aim is to gather information on the seasonal movements of gazelles and saiga in Mongolia to Norwegian reindeer. The hundreds of paths would then be presented in an electronic migration map. The researchers wrote a report that recently appeared in the publication Science.

The report describes how animal movements over long distances to get food and other resources are not doing so well. The main reason for the struggles comes from land development by humans. Roads and fences create barriers for the animals, restricting their movement. And the warming of the planet has also unsettled environmental systems.

The possibility of losing some ungulate migrations makes mapping and protecting the paths that much more urgent. Migration was not well understood until recently. GPS technologies enabled researchers to document the exact paths that animals take across land. Historic data about numbers of animals traveling those paths is largely lacking. 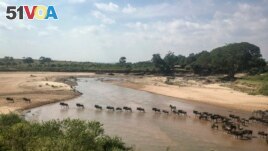 FILE - In this July 22, 2020, file photo taken by a drone in the Maasai Mara is the annual migration of wildebeest from the Serengeti National park in Tanzania to the Maasai Mara national reserve in Kenya.

Atle Mysterud, a biology professor at the University of Oslo in Norway, is one of the scientists working with Kauffman on the international effort. He said he hopes the effort will help Norway take steps to recognize and plan in a way that preserves its migratory reindeer, red deer and moose. Today, that recognition and planning is lacking. Many of the northern European migrations are in decline.

Mysterud said, "It remains to be seen if this is a starting point of a new direction or if it will be some kind of historical map of how the migrations used to be."

Joe Ogutu studies migratory east African wildebeest, zebra and Thomson's gazelle for the University of Hohenheim in Stuttgart, Germany. Since 2015, he has watched the ungulate migration called Mara-Loita in southwestern Kenya stop working because of fence-building and sharing land space with hundreds of thousands of sheep and goats.

"This migration, we can save," Ogutu told the News & Guide. "It has collapsed, but it has not died, because the animals that participated in the migration are still there."

Ogutu hopes that the Global Initiative on Ungulate Migration brings attention to the Mara-Loita migration and other at-risk paths. Publicity and attention, he said, will hopefully lead to its restoration and protection.

The global effort is in partnership with the Convention on the Conservation of Migratory Species of Wild Animals, a United Nations agreement.

The virtual map will use GPS tracking technology, mapping software and data-sharing applications, along with local and indigenous knowledge. Another goal of the project is to map lost migrations, documenting local and historical knowledge of animal movements.

hoofed – adj. having the hard covering on the foot of an animal such as a horse or pig

globally – adv. in a way that relates to the whole world

GPS – n. a radio system that uses signals from satellites to tell you where you are and to give you directions to other places

migration – n. the act or an instance of moving from one place to another often on a regular basis

spontaneously – adv. done or said in a natural and often sudden way and without a lot of thought or planning