Update Required To play the media you will need to either update your browser to a recent version or update your Flash plugin.
By Ashley Thompson
25 December, 2018


How do you measure a chicken's happiness? Is it in the way it runs for food? Or by how much time it spends cleaning itself?

To find the answers to these questions, researchers in Canada are putting 16 kinds of chickens through a series physical and mental tests.

They are watching how well the birds can climb over a barrier for food, how nervous they appear and whether they play with a fake worm. Chickens cannot say how they feel, but researchers believe that playing with the worm might be a sign of happiness.

The researchers are with Ontario's University of Guelph. Stephanie Torrey is one of the researchers. Torrey said the animal welfare world wants to do more than just reduce suffering. Now, researchers aim to learn if and how animals can really enjoy their lives. 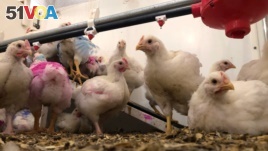 This Friday, Oct. 12, 2018 photo shows chickens under observation at the University of Guelph in Ontario, Canada. Researchers are tracking chicken traits like weight, growth rate and meat quality they hope will be useful to the poultry industry. (AP Photo/Federica Narancio)

Supporters of animal welfare say the poor treatment of chickens begins with birds that have been bred to have breasts so big they cannot fully walk. They say today's chickens are unusually huge and in great pain. They say the industry needs to change breeds.

Many in the chicken industry say there is no problem. They say that broiler chickens – the most commonly used bird -- may not move around a lot because they do not have a lot of energy. Even if the industry agreed to change breeds, it is not clear what the new birds should look like.

The two sides also disagree about the cause and frequency of health issues among chickens.

Chicken companies Tyson and Sanderson Farms, for example, admit that the size of chicken breasts has increased greatly over the years. But both say they are not seeing widespread problems as a result.

John Glisson of the U.S. Poultry and Egg Association says broiler chickens are especially inactive by nature. Some people may mistake the birds' inactivity for a medical problem.

The industry says changing chicken breeds would be costly in several ways. Changing to broiler chickens that do not grow as big or as fast would mean using up more water and other resources. Chicken prices at food stores would be higher, too.

Still, animal welfare is becoming a bigger public image concern. Companies say they are always looking for ways to take better care of their chickens.

Tyson recently ran a trial in which it let chickens choose from living areas with differing levels of light. And company Perdue is testing giving its usual birds as much light and space as its organic birds.

The Humane Society of the United States says improving chickens' living conditions helps. But, it believes the bigger problem is breeding that has resulted in misshapen chickens. It says chickens have been genetically changed to be so huge that their legs cannot support them.

"It is crazy for anyone to have to remind the industry that birds naturally walk," said Josh Balk, the Humane Society's vice president of farm animal protection.

Balk said the study in Canada will provide important information on what breeds of chickens might suffer less.

University of Guelph researchers are also examining chicken qualities such as weight, growth rate and meat quality. They hope the information will be useful to the industry.

Several companies say they already track health and welfare themselves. Still, they are interested in the research.

The Guelph study is supported by the Global Animal Partnership, which certifies corporate animal welfare requirements. In 2016, it launched a campaign to get companies to change to "slower growing" breeds of chickens. Since then, it has admitted that chicken welfare is more complex than just growth rate.

It is now pushing for a "better" chicken, and hopes the study will help define what that means.

The Associated Press reported this story. Ashley Thompson adapted it for VOA Learning English. Kelly Jean Kelly was the editor.

fake - adj. not true or real

welfare - n. the state of being happy, healthy, or successful; well-being

frequency - n. the fact or condition of happening often

organic - adj. grown or made without the use of artificial chemicals

track - v. to follow and find (someone or something) especially by looking at evidence

certify - v. to say officially that something or someone has met certain standards or requirements