Update Required To play the media you will need to either update your browser to a recent version or update your Flash plugin.
By
04 January 2022

A group of U.S. and Canadian scientists found that some species are living on a huge area of plastic garbage floating in the Pacific Ocean. 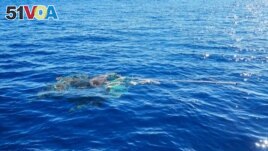 Some coastal marine species are thriving and reproducing on plastics in the Great Pacific Garbage Patch, including abandoned fishing nets. (Courtesy of Ocean Voyages Institute)

Linsey Haram of the Smithsonian Environmental Research Center was the lead writer of the report that appeared recently in the publication Nature Communications.

"We expected to find oceanic marine species that have adapted on plastics, but we were...surprised to discover coastal marine species as well," Haram said.

It is not known how some coastal marine life got out into the ocean, added Haram.

"They may already be out there settling on the plastics, but most likely they are being...transported from the coast on floating debris," she told VOA.

Debris is another term for waste.

The study looked at the Great Pacific Garbage Patch between Hawaii and California. The patch, or area, is more than 1.5 million square kilometers. It is mostly plastic waste.

The debris includes large amounts of very small pieces of plastic, along with water bottles, toothbrushes and fishing gear. The garbage is drawn together in circular ocean flows called gyres.

The plastics can float together like that for years.

Amy Uhrin is chief scientist of the Marine Debris Program at the National Oceanic and Atmospheric Administration in Washington.

The size of the patch can change depending on the wind and ocean currents, Uhrin told VOA.

The Ocean Voyages Institute in Sausalito, California, is a nonprofit group that works to remove garbage from the ocean. It gave the researchers the debris needed for the study.

The researchers were surprised by what they found.

"What has been most eye-opening is that the coastal marine species were not only thriving but reproducing," Haram said.

However, many questions are still unanswered.

"How do you survive being on a piece of plastic in the middle of the ocean?" asks Greg Ruiz of the Smithsonian's Environmental Research Center and a writer of the report.

"The coastal species may be creating their own ecosystem on the plastic debris," Ruiz said. Fish and bird waste in the water may provide food.

"We also want to figure out how the coastal and oceanic species are interacting since they are competing for limited space on the objects," Haram said. "They could be using each other as a source of food."

There is also some concern that some of the creatures may become invasive species.

"We want to know if other coastal marine life are on plastics in all of the five main ocean gyres worldwide," Haram said.

Ruiz added, "we're concerned that coastal organisms from different regions could form colonies and spread disease to other marine life, including fish."

VOA News reported on this story. John Russell adapted it for Learning English.

garbage -- n. things that are no longer useful or wanted and that have been thrown out

thrive – v. to grow or develop successfully : to flourish or succeed