Update Required To play the media you will need to either update your browser to a recent version or update your Flash plugin.
By Bryan Lynn
10 July 2022


American researchers have developed a lightweight sailplane designed to fly above Mars and gather data.

The nonmotorized aircraft is built to use natural wind patterns around Mars to operate for days at a time.

The plane is equipped with flight, temperature and gas sensors, as well as cameras. It is designed to collect data on the Red Planet's atmosphere and physical structures. 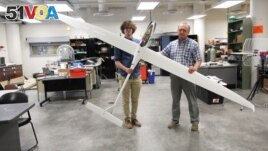 A working model of the sailplane was developed by engineers at the University of Arizona. The team is partnering on the project with Alexandre Kling, a research scientist with the American space agency NASA.

Kling said in a statement the sailplane can be a valuable resource in helping NASA study an important area above the surface of Mars.

"You have this really important, critical piece in the planetary boundary layer, like in the first few kilometers above the ground," he said. "This is where all the exchanges between the surface and atmosphere happen."

Kling said this area, or zone, above the planet is where dust is picked up and sent into the atmosphere. It is also where gas elements are mixed. So far, Kling said, very little data is available about this zone.

The researchers describe their progress on the sailplane in a study that recently appeared in the publication Aerospace.

The team notes that there are currently eight active spacecraft orbiting Mars and three rover vehicles also exploring the surface. But these research vehicles are limited in their ability to collect data on the area just above the Mars surface.

NASA has experimented with a small helicopter on Mars, the Ingenuity. So far, tests of Ingenuity have been successful. And such an aircraft could perform operations like ones the sailplane is designed for. But the experimental helicopter is only able to fly for a few minutes at a time and can only reach heights of about 12 meters.

"These other technologies have all been very limited by energy," says the study's lead author, Adrien Bouskela. He is an engineering doctoral student at the University of Arizona.

Bouskela said the goal of the sailplane is to use natural wind flows around Mars to avoid having to use engine-powered vehicles. "The main question is: How can you fly for free? How can you use the wind that's there?" Bouskela asked. He noted that other research vehicles usually depend on energy from the sun and need batteries to operate.

The researchers say the sailplane they developed is lightweight, low-cost and completely powered by wind. The current model has a wingspan of about three-and-a-half meters. The team says the plane is designed mostly to use vertical winds blowing above Mars.

But the aircraft will also be able to use a method called dynamic soaring, the engineers said. This method permits a plane to gain energy by repeatedly crossing boundaries between air masses of different strength levels. This kind of wind activity is known to be common on Mars.

Current Mars explorers have mainly captured images and data from flat and sandy areas of the planet where it was safe for the vehicles to land. But the researchers say the sailplanes "would be able to explore new areas by taking advantage of how wind patterns shift around geologic formations such as canyons and volcanoes."

The team has carried out tests of the sailplane by attaching it to a balloon floating in the sky. More tests are planned for this summer when researchers are expected to send the plane up to about 4,500 meters above sea level. They also plan on expanding their research involving mathematical modeling for possible flight plans based on Mars climate data.

Bryan Lynn wrote this story for VOA Learning English, based on reports from the University of Arizona and NASA.

layer – n. an amount of substance covering a surface

battery – n. a device that provides and stores electricity for certain electronic devices

vertical – adj. pointing straight up from a surface

boundary – n. a line that divides two areas or forms an edge around an area

take advantage of – v. to use the good things in a particular situation

shift – v. to change or make a change in place, position, or direction