Update Required To play the media you will need to either update your browser to a recent version or update your Flash plugin.
By John Russell
27 June 2022


The largest-known bacterium is changing researchers' ideas about what is possible for bacteria, Earth's most ancient life form.

The organism was discovered on the Caribbean island of Guadeloupe and is big enough to be seen with the human eye.

Scientists said recently that the bacterium, called Thiomargarita magnifica, is unusual for its size -- up to about two centimeters long. It is also notable because its structure is unlike other bacteria. 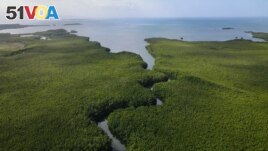 An aerial view of the mangroves of Guadeloupe, a French archipelago in the Caribbean, where the unusually large bacterium Thiomargarita magnifica was found. (Hugo Bret/U.S. Department of Energy's Lawrence Berkeley National Laboratory/Handout via REUTERS)

The DNA, an organism's genetic information, is not free-moving inside the cell like in most bacteria. Instead, the DNA is contained within many small membrane-bound sacs. Membrane-bound structures in cells are called organelles.

Jean-Marie Volland was a co-leader of the study that appeared in the publication Science.

Volland said of the bacteria, "It is thousands of times larger than regular-sized bacteria. Discovering this bacterium is like encountering a human being as tall as Mount Everest."

Researchers have found the bacterium in several places in Guadeloupe, a French island group in the Caribbean.

Study co-leader Olivier Gros first discovered the bacterium in the sulfur-rich seawater of a Guadeloupe swamp - land that is wet and partly covered with water.

Gros described finding long white materials attached to a leaf of a mangrove tree. He brought the materials back to the lab to study.

"Big surprise for me to have so huge a bacterium living in the mangroves of Guadeloupe," he said.

A normal bacteria measures one to five micrometers long. A micrometer is one millionth of a meter. This species averages 10,000 micrometers or one cm long. Some Thiomargarita magnifica are double that length.

Volland said the bacterium is bigger "than what we thought was the maximum possible size for a single bacterium." He added, "They are about the same size and shape of an eyelash."

The largest-known bacterium until now had a maximum length of around 750 micrometers.

Bacteria are single-celled organisms that live nearly everywhere on Earth. Bacteria are thought to have been the first organisms and remain very simple in structure billions of years later. The bodies of humans are filled with bacteria. Only a small number of these cause disease.

Caribbean mangrove swamps are filled with organic material. Microbes break down this material and produce sulfur. The sulfur-rich environment offers an energy source for bacteria like Thiomargarita magnifica.

The researchers named its DNA-holding organelles "pepins" after a French word for small seeds inside fruits.

"Aside from two exceptions, there were no other bacteria known to keep their DNA inside a membrane-bound organelle. That is, in fact, a characteristic of more complex cells which have a membrane-bound nucleus, such as human cells, or animal and plant cells," Volland said.

A genome map showed that Thiomargarita magnifica has lost some genes needed for cell division and has more than the usual number of copies of genes responsible for cell lengthening.

"The genome is also very big and contains three times the average number of genes that are usually found in bacteria. Half of those genes, we have no idea what are they for," Volland said.

This bacterium shows how life on Earth still has surprises awaiting discovery, he said.

"Life is fascinating, very diverse and very complex," Volland added. "It's important to stay curious and have an open mind."

sac – n. a part inside the body of an animal or plant that is shaped like a bag and that usually contains liquid or air; a hollow, flexible structure

organelle – n. a specialized cellular part that has a specific function

mangrove – n. a tropical tree that has roots which grow from its branches and that grows in swamps or shallow salt water

maximum –n. the largest number or amount that is possible

eyelash – n. any one of the hairs that grow along the top of the eyelid

characteristic –n. a quality that makes something different from other things