Update Required To play the media you will need to either update your browser to a recent version or update your Flash plugin.
By John Russell
22 January 2023


Researchers in Norway say they have found what they believe is the world's oldest runestone – a stone with ancient writing on it.

Runes are the characters in several Germanic alphabets. These characters were used in northern Europe from ancient times until the change to the Latin alphabet. The exact origin of runic writing is unclear.

The Norwegian researchers say the writing on the runestone could be up to 2000 years old. 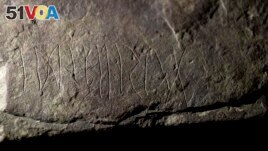 The runestone found at Tyrifjorden, Norway, is shown at the Museum of Cultural History in Oslo, Thursday, Jan. 12, 2023. (Javad Parsa/NTB Scanpix via AP)

The runestone is square and flat. The runes carved into it may represent the earliest example of recorded words in Scandinavia, the Museum of Cultural History in Oslo said.

It said it was "among the oldest runic inscriptions ever found" and "the oldest datable runestone in the world."

Kristel Zilmer is a professor at University of Oslo, of which the museum is part. Zilmer told The Associated Press, "This find will give us a lot of knowledge about the use of runes in the early Iron Age. This may be one of the first attempts to use runes in Norway and Scandinavia on stone."

Zilmer said that the ancient writer might have used a knife or needle to make the runes.

The runestone was discovered in the fall of 2021 during a dig in Tyrifjord, west of Oslo. The area is known for several major archaeological finds.

Zilmer explained that the find was announced late because researchers needed time to study "and date the runestone."

Measuring 31 centimeters by 32 centimeters, the stone has several kinds of writings. Not all of them make sense. Eight runes on the front of the stone read "idiberug" — which could be the name of an individual or family.

Zilmer called the discovery "the most sensational thing that I, as an academic, have had." Sensational means causing great excitement.

There is still a lot of research to be done on the rock, named Svingerud stone after where it was found.

"Without doubt, we will obtain valuable knowledge about the early history of runic writing," Zilmer added.

The Museum of Cultural History is holding a public showing of the runestone for a month. The museum holds Norway's largest collection of historical objects, from ancient times to modern-day.

Jan M. Olsen reported on this story for the Associated Press. John Russell adapted it for VOA Learning English.

character – n. a symbol (such as a letter or number) that is used in writing or printing

origin – n. the point or place where something begins or is created : the source or cause of something

carve – v. to cut (something, such as a pattern or design) into a surface

inscription – n. a word that is cut into a surface

obtain – v. to gain or get (something) usually by effort