Update Required To play the media you will need to either update your browser to a recent version or update your Flash plugin.
By Pete Musto
19 May, 2019


Creatures that refuse to die, commonly known as zombies, have appeared in popular movies and television shows for years.

Recent research has shown that an unusual part of real human biology possesses zombie-like qualities: a special kind of cells.

Like the stars of many scary stories, these so-called ‘zombie cells' also refuse to die. Studies suggest that, as they build up in your body, they lead to aging and the conditions that come with that process, like bone and brain diseases.

Now, researchers are studying drugs that can kill zombie cells and possibly treat the problems they bring.

James Kirkland is a medical doctor and aging specialist with the Mayo Clinic in Rochester, Minnesota. He is working on the research. He told the Associated Press that, generally, the goal is to fight aging itself. This in turn may delay the appearance of some age-related disease and disabilities.

The research has been done mainly in mice. Earlier this year, the first test on people was published and provided some interesting results.

Zombie cells are actually called senescent cells. They start out like usual cells, but then face problems, like viral infection or damage to their genetic material (DNA). At that point, a cell may die or become a zombie cell – entering a state of suspended animation.

These zombie cells release chemicals that can harm nearby normal cells. That is where the trouble starts.

What kind of trouble? In studies on mice, drugs that destroy zombie cells — called senolytics — have been shown to improve many different conditions. This includes cataracts, diabetes, enlargement of the heart, kidney problems, and age-related muscle loss.

Mouse studies have also shown a more direct tie between zombie cells and aging. When drugs targeting those cells were given to older mice, the animals showed improved walking speed, strength and an ability to continue physical activity. Even when researchers used the treatment on very old mice, it extended their lifespan by about 36 percent. 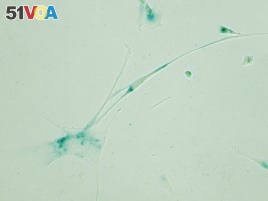 This April 2019 microscope photo provided by the Niedernhofer Lab of the Institute on the Biology of Aging and Metabolism at the University of Minnesota shows senescent human fibroblast cells in Minneapolis, Minn.

Researchers have also shown that putting zombie cells into young mice generally made them act older. Their walking speed slowed down. Their muscle strength and ability to stay active also decreased. Tests showed the newly added cells changed other cells into the zombie state.

This year, Kirkland and his team published the first study of a zombie-cell treatment in people. It involved 14 patients with idiopathic pulmonary fibrosis, an often deadly lung disease. Risk of the disease rises with age, and patients' lungs show evidence of zombie cells.

After three weeks of treatment, patients who took part in the experiment improved on some measures of physical health, like walking speed. Other measures did not show improvement.

Gregory Cosgrove is a doctor and chief medical officer of the Pulmonary Fibrosis Foundation. He was not involved in the study. He noted that, overall, the results are a good sign.

"It really raises enthusiasm to proceed with the more rigorous studies," Cosgrove said.

The field of zombie cell research is still young. But Kirkland estimates at least 12 companies have formed or launched efforts to study treatments.

Laura Niedernhofer is a professor of biochemistry at the University of Minnesota in Minneapolis. She suggested that, in addition to age-related diseases, anti-zombie cell drugs might be useful for treating early aging among cancer survivors. This condition brings on the early appearance of some diseases.

Niedernhofer said the goal is not to prevent damaged cells from turning into zombies, because they may become cancerous instead. The aim is to kill cells that have already changed, or to limit the harm they do.

And what about giving them to healthy people who want to prevent aging? That is possible but a long way off, after studies have established that the drugs are safe enough, Niedernhofer said.

Kirkland added, "We may not get there."

In any case, experts do support the research so far. George Kuchel, a doctor with the University of Connecticut Center on Aging in Farmington, found the results very interesting.

Nir Barzilai is a researcher of aging at the Albert Einstein College of Medicine in New York. He believes treating zombie cells will play a part in the overall effort to delay, stop and maybe even undo aging.

Malcolm Ritter reported on this story for the Associated Press. Pete Musto adapted it for VOA Learning English. Ashley Thompson was the editor. We want to hear from you. How likely do you think it is that researchers will be able to stop the process of aging? Write to us in the Comments Section.

suspended animation – n. a state in which the processes of the body, such as blood circulation, stop or become very slow for a period of time while a person or animal is unconscious

cataract(s) – n. a condition in which a part of your eye called the lens becomes cloudy and you cannot see well

enthusiasm – n. a strong feeling of active interest in something that you like or enjoy

rigorous – adj. done carefully and with a lot of attention to detail