Researchers Find Bright Side to Some Invasive Species

Update Required To play the media you will need to either update your browser to a recent version or update your Flash plugin.
By Bryan Lynn
22 October, 2018


Non-native species present threats to natural environments across the world by pushing out native organisms.

Their presence can seriously damage ecosystems that provide clean water, food and other important resources to many living things.

Destructive, non-native species are called invasive species. Scientists have long struggled to find ways to slow or stop them.

But American researchers have discovered that some invasive species can also have a good effect on the environment.

One of them is Phragmites, a tall, fast-growing grass. This plant is thought to have first appeared in Europe in the early 19th century. Phragmites is not native to the United States. But it now is very common along the U.S. East Coast and can be found in wetlands across North America. 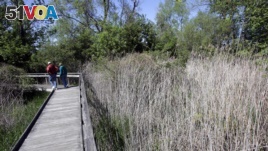 The U.S. Fish and Wildlife Service says the fast spread of Phragmites in the 20th century was likely caused by several things. They include the building of railroads and major expressways that affected natural habitat. There was also widespread development along the coast. A rich supply of minerals in coastal waters likely also drove plant growth.

Researchers found in a new study that one major benefit of invasive species is that they can eat up carbon dioxide. Scientists have blamed the gas for being a major cause of rising temperatures on Earth's surface.

The research showed that coastal ecosystems that had been overtaken by invasive species had about 40 percent more carbon than native habitats.

Christina Simkanin helped to prepare a report on the study. Simkanin is a biologist at the Smithsonian Environmental Research Center in Maryland. She says the findings were somewhat surprising.

"I think because non-native species are often thought of as being negative so often, and they do have detrimental impacts. But in this case, they seem to be storing carbon quicker."

She added that Phragmites and some other non-native species keep increasing the carbon they take in because the plants grow and spread so quickly.

Simkanin says the issue can be complex when different kinds of invasive species are involved. While she does not believe it is a good idea to let invasive invaders take control, she thinks finding a solution is not always simple.

Such decisions are not likely to get any easier in the future. Smithsonian research shows that Phragmites will keep outcompeting native species as temperatures and carbon dioxide levels rise.

species – n. a group of plants or animals that share similar characteristics

ecosystem – n. all the plants, animals and people living in an area considered their environment

habitat – n. the natural surroundings in which a plant or animal usually lives

negative – adj. not having enthusiasm or positive opinions about something