Update Required To play the media you will need to either update your browser to a recent version or update your Flash plugin.
By Dan Novak
12 January 2022


Dogs can tell the difference between different languages, researchers in Hungary have found.

For their study, the researchers played recordings of the story "The Little Prince" in both Spanish and Hungarian to a group of 18 dogs. Then they examined how the animals' brains reacted.

The study was led by Laura V. Cuaya at Eotvos Lorand University in Budapest. She moved to Hungary from Mexico a few years ago and brought her dog Kun-kun with her. 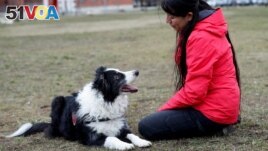 "I wondered whether Kun-kun noticed that people in Budapest spoke a different language, Hungarian," she said.

She said the study found for the first time that a non-human brain can "distinguish (between) languages."

Raul Hernandez-Perez is a co-writer of the study. He said that when dogs live with humans, they can learn patterns of the language they hear.

During the experiment, Kun-kun and other dogs were trained to lie down in a brain scanner for several minutes.

Every dog in the study had heard only one of two languages spoken by their owners—either Hungarian or Spanish. Then researchers compared how their brains reacted to a highly familiar language and to a completely unfamiliar one.

Cuaya said that dogs could understand the differences in how the two languages are spoken. Spanish, she said, is more melodic, while Hungarian is more monotone.

"We believe that dogs detect that," she said.

The dogs listened to parts of "The Little Prince" in Spanish and Hungarian. Researchers also played scrambled versions of the story to test if they could hear the difference between speech and non-speech. To "scramble" a recording means to change it so that listeners are not able to understand it.

When comparing brain reactions, researchers found clear activity in the dogs' primary auditory – or hearing – area of the brain. That suggested that they can distinguish between speech and non-speech.

The dogs' secondary auditory area is for understanding complex sounds. This part of the dogs' brains produced different activity patterns when they heard a familiar language compared to an unfamiliar language.

The researchers also found that the older the dogs were, the better they were able to distinguish between the two languages.

distinguish — v. to notice or recognize a difference between people or things

pattern — n. a repeated form or design especially that is used to decorate something

scanner — n. a device that is used to see inside something

melodic — adj. having a pleasant musical sound or melody

monotone — adj. a way of talking or singing without raising or lowering the sound of your voice

detect — v. to discover or notice the presence of