Update Required To play the media you will need to either update your browser to a recent version or update your Flash plugin.
By John Russell
18 December 2021


Hundreds of dinosaur footprints and bones have been found in Poland. The prints are in such good condition that even the scaly skin can be seen.

The finding gives important information about the complex environment that existed about 200 million years ago, researchers said. 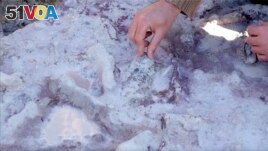 Scientists from the National Geological Institute in Warsaw and Grzegorz Niedzwiedzki from Uppsala University in Sweden found the remains of footprints and bones were found in a clay mine in Borkowice, 130 kilometers south of Warsaw. (Handout via Reuters)

The Polish Geological Institute-National Research Institute described the find as a treasure trove, meaning a collection of valuable things.

The footprints and bones were found in a clay mine in Borkowice, 130 kilometers south of Warsaw.

Scientists Grzegorz Pienkowski from the National Geological Institute in Warsaw and Grzegorz Niedzwiedzki from Uppsala University in Sweden found the remains.

The largest footprints measure 40 centimeters. The researchers said those were left by meat eaters, or carnivores. In many prints, the skin left a very clear image.

"In order for such a state of preservation to be possible, a very special sequence of events had to take place in a short time," Pienkowski said in a statement.

Several hundred dinosaur tracks, representing at least seven kinds of dinosaurs, have been found and geologists say they are likely to find more. They have also discovered small pieces of bone from animals and fish.

Alan Charlish and Anna Wlodarczak-Semczuk reported on this story for Reuters. John Russell adapted it for Learning English. Caty Weaver was the editor.

trace – n. something (such as a mark or an object) which shows that someone or something was in a particular place

habit – n. a usual way of behaving : something that a person does often in a regular and repeated way

preservation – n. the degree to which something is kept safe from harm or ruin

sequence – n. the order in which things happen or should happen