Update Required To play the media you will need to either update your browser to a recent version or update your Flash plugin.
By Christopher Jones-Cruise
12 February, 2016


Researchers in Slovenia say they have found some evidence of a link between the Zika virus and an increase in some birth defects.

They published the study this week in the New England Journal of Medicine. The Journal also published a report from a group of American health experts that supports the Slovenian research.

The researchers studied a woman who was infected with the Zika virus. She had an abortion after an examination showed the fetus had severe health problems. 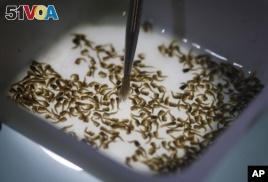 In this Feb. 1, 2016 photo, a technician from the British biotec company Oxitec, inspects the pupae of genetically-modified Aedes aegypti mosquitoes, which carry the Zika virus, in Campinas, Brazil.

When the researchers examined the aborted fetus they found the Zika virus. And they found that it had only attacked the brain. They believe this is strong evidence that the virus causes birth defects. But they said more study must be done to confirm their beliefs.

People infected with the Zika virus suffer from fever, rash, joint and muscle pain and red eyes. It is not a severe illness. But because of its possible link to birth defects, experts believe it is a great danger to pregnant women.

The World Health Organization (WHO) said the virus could be linked to 4,000 suspected cases in Brazil of microcephaly, a condition in which babies are born with very small heads. It causes severe brain damage.

In February, the WHO said the virus is a global health emergency. And it predicted that Zika could infect as many as 4 million people across the Americas this year.

The declaration meant more money and other help would be given to fight the virus. But the health agency did not say there should be a ban on travel or trade in areas where the virus is present.

Some health experts say pregnant women, or women trying to get pregnant, should not travel to Brazil. The 2016 Summer Olympics are taking place in the South American country.

This week, U.S. public health officials told Congress that workers must kill the mosquitoes that carry the virus if its spread is to be stopped. They said the mosquito that carries the disease lives in parts of the southern United States and on the island of Puerto Rico. They said those areas are at risk of having an outbreak of the virus.

No treatment or vaccine for the Zika virus exists. But drug companies in India, Japan and France are working to develop possible vaccines.

VOANews.com reported this story from Washington. Christopher Jones-Cruise adapted it into VOA Learning English. Hai Do was the editor.

infect – v. to cause (someone or something) to become sick or affected by disease