Update Required To play the media you will need to either update your browser to a recent version or update your Flash plugin.
By Dan Friedell
27 August 2022


International researchers and experts at Google are working on a way to prevent false information about Ukrainian refugees from spreading in Eastern Europe. They call their effort "pre-bunking."

The term comes from the word "debunking," which means to show that an idea is untrue. "Pre-" means before. In other words, the researchers aim to prevent misinformation from spreading in the first place.

The idea of pre-bunking is to educate social media users so they can decide on their own if videos, website headlines and social media posts are false. 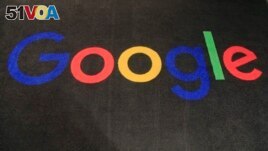 A team from Google is working with a number of researchers from around the world on ways to stop the spread of misinformation. (AP Photo/Michel Euler, File)

The researchers started thinking about pre-bunking earlier this year, after thousands of people began fleeing Ukraine following Russia's invasion. The refugees went to places like Poland, the Czech Republic and Slovakia.

As refugees arrived in these countries, false claims came with them. Many people saw social media posts about Ukrainians taking jobs, carrying out crimes and taking support from aid organizations even if they did not need it.

There were even stories about Ukrainian refugees painting their national colors of blue and yellow on Polish statues. News reports later suggested the vandalism may have been done by pro-Russian groups hoping to create tension between Ukraine and Poland.

The researchers involved in the effort are from Cambridge and Bristol universities in Britain as well as the University of Western Australia. Their work appeared recently in the publication Science Advances.

In the report, the researchers explain that short online videos that teach critical thinking skills can help people understand when they are being targeted with misinformation.

The videos explain the common parts of a misinformation campaign. The researchers say the parts are emotional language, personal attacks and false comparisons between two unrelated things.

People who looked at the examples in the videos improved their ability to tell the difference between true and false information.

Google was also part of the study. The division that assisted in the study is called Jigsaw. Beth Goldberg is the head of research there. She said, "We spent quite a bit of time and energy studying the problem." The goal, she said, was to make internet users "more resilient to misinformation."

The researchers are now working to see if the same users can be helped by seeing so-called "booster" videos. Booster videos are additional videos that could add to what the viewers have already learned.

Google will work to show the videos on popular social media sites like YouTube, TikTok and Facebook in the European countries of Poland, the Czech Republic and Slovakia.

The leader of Google's Jigsaw group is Yasmin Green. She said the pre-bunking effort is supposed to work alongside Google's other efforts to prevent the spread of false information. She said her group wants to be sure people are "safe and informed online."

The researchers looked at traditional efforts to fight against misinformation. They noted that they are not always effective. For example, they said the process of "fact-checking" by reporters can be helpful, but it takes a long time. In addition, the process known as content moderation, which is done by social media companies, can be uneven. They noted that Facebook and Twitter are often criticized for not doing enough to remove material that is false or in violation of their rules.

Instead, the researchers think it is a better idea to give people the tools to look at the material and decide for themselves whether it is false. That helps people judge a wide amount of information.

They also said that fact-checking by reporters can be ignored by people who do not trust some news organizations.

post–n. information that is put up for the public to see, such as a sign or a message on a website

vandalism –n. the act of deliberately destroying or damaging property

tension –n. a state in which people or groups disagree with each other and feel anger toward each other

tactic –n. an action or method that is planned and used to achieve a particular goal

resilient –adj. able to become healthy or strong again after something bad has happened

moderation –n. the act of guiding a discussion involving a group of people, such as the users of a social media site