Update Required To play the media you will need to either update your browser to a recent version or update your Flash plugin.
By Dan Friedell
28 November 2021


Some African elephants live in grassy open areas called savannas. Scientists can easily count the number of savanna elephants from an airplane because there are very few trees.

But other African elephants live in dense forests. Forest elephants are shy and especially hard to find.

The Central African country of Gabon is home to two-thirds of all African forest elephants. The forests in Gabon are extremely dense. That makes it hard to know exactly how many forest elephants there are. 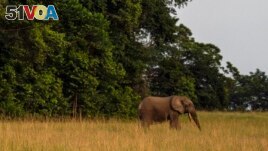 A forest elephant steps out of the forest in Gabon's Pongara National Park forest, on March 12, 2020. (AP Photo/Jerome Delay)

But scientists have found a new way to count them. They use evidence that the animals leave behind. In other words, they look for elephant waste.

Researchers collected waste samples over a period of three years. The researchers walked about 12 kilometers each day. They looked for waste as well as other signs of elephants, including footprints and broken trees. They tested the waste samples for DNA.

Even with the new information, the International Union for Conservation of Nature believes the population of forest elephants in Central Africa has dropped sharply. It estimates the numbers have decreased by 86 percent in the last 31 years. Forest elephants are threatened by land clearing and by hunters.

The researchers who worked on the new elephant count said the animals live throughout Gabon, covering 90 percent of the total surface area.

Almost 90 percent of the country is covered in forest.

Emma Stokes is the area director for the Wildlife Conservation Society. She said Gabon is "very unique," or special, because elephants can be found in so much of the country.

During their counting efforts, the researchers looked for fresh waste. Sometimes, they would find elephant waste that was too old to be used as evidence.

When they found a sample, they put it in a small glass container. They sent the containers to a laboratory in Libreville, Gabon's capital. Scientists looked at about 2,500 samples.

The samples had to be processed first to remove impurities or organisms that could affect results.

Stephanie Bourgeois was one of the writers of a published study about the elephant count. She said the DNA helped the scientists estimate how many different elephants lived in the area that the samples came from.

It is the first elephant count in Gabon in 30 years. The last count only looked at 14 percent of the area in which elephants live.

John Poulsen is an ecologist at Duke University in the state of North Carolina. He was not involved in the elephant research. He said the results of the count are "exciting" because the population estimate rose and because researchers proved a new way of counting elephants can work.

A similar method is being used for tigers in India.

Poulsen added, however, that Gabon's government now has a greater responsibility to keep the forest elephants safe.

Lee White is Gabon's minister of water and forests. He said 65 to 70 percent of all African forest elephants live in Gabon. He called it a "tragedy" that other Central African countries have not been able to save their elephants.

He noted that the nations that have not been able to keep their elephants safe have suffered civil wars.

At the recent United Nations climate change meeting held in Scotland, White said Gabon still has problems ahead. He believes climate change has reduced the amount of fruit available in the country's forests. Because of this, the elephants are seeking out food from farms. This creates a conflict between people and elephants. About 10 people die each year from such conflicts.

"It looks like climate change is starting to impact the forest," White said. "And that means the elephants are hungry."

Dan Friedell adapted this story for Learning English based on a report by The Associated Press. Ashley Thompson was the editor.

Are you pleased to hear the elephants are doing well? What would you do to keep them healthy? Tell us in the Comments Section and visit 51VOA.COM.

footprint – n. a track or mark left by a foot or shoe

tragedy – n. a very sad, unfortunate, or upsetting situation : something that causes strong feelings of sadness or regret