Update Required To play the media you will need to either update your browser to a recent version or update your Flash plugin.
By Dan Friedell
18 January 2023


Researchers have wanted to know for years why the buildings made by the ancient Romans held up so well.

A new study finds that their concrete, a strong building material, had special characteristics.

Researchers say the materials in the concrete worked together to make it stronger. 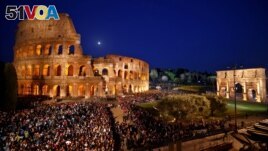 The three main parts were lime, volcanic ash and water. Lime is a powdery substance that comes from heating limestone.

Admir Masic is a civil and environmental engineering professor at Massachusetts Institute of Technology (MIT) who led the study and published the results in Science Advances. He said the way the Romans started using lime over 2000 years ago gave the concrete "self-healing" properties.

He said the discovery will help current builders improve their concrete "through a Roman-inspired strategy." Masic is working to make a new building product based on the Roman concrete and is hoping to sell it through a new business he started.

Masic and his researchers wanted to know why the Roman structures lasted so long when even some modern concrete crumbles after only a few years.

In addition, the Roman concrete was good for use underwater. This quality helped the Romans build harbors and other structures that could hold back the ocean.

The researchers said some small bits of lime that were not well mixed into the concrete were not a mistake as was thought earlier. The pieces of lime are called clasts. The new study called the clasts "instrumental."

Masic said the small pieces of lime keep the concrete from falling apart when it cracks. In most cases, a crack in concrete permits water to enter and the crack widens. But, in the Roman concrete, the small bits of lime would dissolve and send small pieces of calcium into the cracks. That action, Masic said, repaired the cracks. In addition, he noted, the calcium mixed with the volcanic ash to create a stronger structure.

Both the Pantheon and the Colosseum are examples of buildings that are almost 2000 years old that used the ancient concrete and are still standing today.

In the past, researchers thought the important material was volcanic ash that came from the area of Pozzuoli, near Naples.

Linda Seymour helped write the study when she was studying at MIT. She called the ancient Romans "great engineers." She added: "The fact that we can still walk around many of their structures is a testament to that."

characteristic –n. something special that makes an item different from others

property –n. a special quality of something

inspired –adj. used to describe something that has an influence on something else

strategy –n. a careful plan or method for achieving a particular goal usually over a long period of time

bit –n. a small part of something larger

dissolve –v. to wear away under the pressure of water

testament –n. proof that something is true or exists