Update Required To play the media you will need to either update your browser to a recent version or update your Flash plugin.
By VOA
01 April, 2013

This is SCIENCE IN THE NEWS, in VOA Special English. I'm Faith Lapidus.

And I'm Bob Doughty. Today we tell about Parkinson's disease. We also report on treatments for the disease.

Parkinson's is a disease of the central nervous system. It is a progressive disorder, meaning it gets worse over time. The disease affects a small area of cells in the middle of the brain. This area is called the substantia nigra. The cells slowly lose their ability to produce a chemical called dopamine. 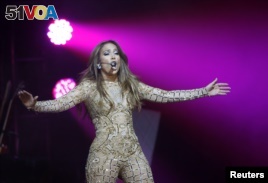 Jennifer Lopez performs at the Muhammad Ali Celebrity Fight Night Awards
The decrease in the amount of dopamine can result in one or more general symptoms of Parkinson's disease. These include shaking of the hands, arms and legs. Other signs can include difficulty moving or keeping balanced while walking or standing. There might be emotional changes, like feeling depressed or worried. The symptoms of Parkinson's differ from person to person. They also differ in their intensity.

The disease is named after James Parkinson. He was a British doctor who first described this condition in 1817. During the 1960s, researchers discovered changes in the brains of people with Parkinson's. These discoveries led to medicines to treat the effects of the disease. There is no cure for Parkinson's and no way to prevent it. And doctors still are not sure what causes the disease.

America's National Institutes of Health says at least 500 thousand people in the United States have Parkinson's disease. About 50 thousand new cases are reported each year. That number is expected to grow as the average age of the population increases.

Parkinson's often affects people around the age of 60. Some researchers believe that almost everyone would develop Parkinson's eventually if they lived long enough.

Most patients have what is called idiopathic Parkinson's disease. Idiopathic means the cause is unknown. People who develop the disease often want to link it to something they can identify. This might be a medical operation or extreme emotional tension.

Many doctors reject this idea of a direct link to Parkinson's. They point to people who have similar experiences and do not develop the disease.

There are several theories about the cause of Parkinson's, but none have been confirmed. Studies have shown a link between the disease and some chemical products. In early 2013, a United Nations study found that man-made chemicals in everyday products are to blame. Other researchers say the disease could result from having contact with chemical pesticides, like those used for killing insects.

Scientists say it is difficult to show a direct link between diseases like Parkinson's and the environment. But in 2007, a European study found a link between Parkinson's and pesticide use. The study also showed that serious head injuries increased a person's risk of the disease.

Scientists at Aberdeen University in Scotland collected information about more than 900 people with Parkinson's or similar conditions. They compared this group to almost two thousand people without the disorder. All the people were asked about their use of pesticides, chemical fluids and metals like iron. The researchers also collected information about family history of the disease and head injuries.

Farm workers and people who said they often used pesticides had a 41 percent greater risk of Parkinson's than others. The disease was also two and one-half times more common among people who had been knocked unconscious more than once in their lives. These people temporarily lost consciousness after suffering a blow to the head.

Another area of study is family genetics. There are examples of members of a family having Parkinson's disease. The National Institutes of Health says about 15 percent of Parkinson's patients are related to others with the disease.

About 10 percent of Parkinson's cases are said to result from genetic mutations, changes within specific genes. One such mutation is called parkin. Recently, German scientists reported finding what they call a signal transduction pathway that activates the parkin gene. They said it also prevents stress-induced death of dopamine-producing neuron cells.

The report came from researchers at the Columbia University School of Medicine and the Albert Einstein College of Medicine of Yeshiva University in New York. Their findings were published in the journal Nature Neuroscience.

There is no cure for Parkinson's disease. But improved treatments to ease the effects of the disease make it possible for many patients to live almost normal lives. People who have lost their ability to do many things sometimes are able to regain some of these abilities with treatment.

Levodopa helps ease symptoms of Parkinson's. But it does not prevent more changes in the brain that are caused by the disease. Other drugs used to treat Parkinson's disease act like dopamine. They produce reactions in the nerve cells in the brain. They can be given alone or in combination with levodopa. Many of the possible side effects are similar to those linked with the use of levodopa. They include sleepiness, feeling sick or having bad dreams.

An operation called deep-brain stimulation also is used to treat Parkinson's disease. Doctors use this treatment to shock the brain in areas that help send messages to the body. These areas can become blocked in Parkinson's patients. When this happens, the messages give misinformation to the body.

In deep brain stimulation, doctors make two small holes in the patient's head. Next, two thin, electrical wires are then placed in the brain. They are connected under the skin to another wire that leads to a small battery placed in the chest. The device supplies electricity.

Deep brain stimulation can reduce the need for levodopa and other drugs. It also helps to reduce symptoms such as shaking and slowness of movement. But brain stimulation has been shown to have more side effects than drug treatments. In one study, about 40 percent of the patients who had the operation experienced problems, including infection.

Deep brain stimulation is not the answer for all Parkinson's patients. Doctors say it is best for patients whose medicines cause side effects or are not working. The treatment is not new. It was first approved for use in the United States in 1997.

Some American researchers think they have found a way to slow the progression of Parkinson's disease. Scientists at Northwestern University looked at the brain cells that were most at risk of getting the disease.

The cells reportedly permitted lots of calcium to enter their cell bodies. The calcium killed dopamine-producing cells and led to signs of Parkinson's disease. The scientists say they found a drug that limited the ability of the brain cells to take in calcium, without causing harmful side effects. More tests are planned.

Scientists are also exploring experimental treatments. Since taking office, President Obama ended restrictions on the use of federal money for studies of human embryonic stem cells. Stem cells from very early embryos are able to grow into any tissue in the body.

Scientists say such cells might be able to cure or treat diseases like Parkinson's. But opponents say stem cell experiments are wrong because human embryos are destroyed. They say this is just like destroying a human life.
Related Articles
go top