Update Required To play the media you will need to either update your browser to a recent version or update your Flash plugin.
By John Russell
21 November 2021


A recent study has followed the origins, or beginnings, of the family of languages that include modern Japanese, Korean, Turkish and Mongolian.

The findings show a shared genetic ancestry for the hundreds of millions of people who speak what the researchers call Transeurasian languages. Such languages had their origin with millet farmers who lived in an area in northeastern China about 9,000 years ago. 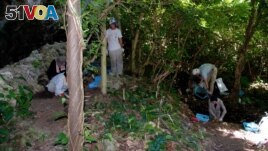 Researchers engage in archaeological excavations at the Nagabaka site on Japan's Miyako island as part of a study that explored the origins of the Transeurasian languages. (Mark Hudson/Handout via REUTERS )

Millet is a small, round whole grain. It was an important early crop as hunter-gatherers became farmers.

The study's findings show how the use of agriculture following the Ice Age powered the movements of some of the world's major language families.

There are 98 Transeurasian languages. Among these are Korean and Japanese as well as several Turkic languages, Mongolic languages, and Tungusic languages in Manchuria and Siberia.

The language family's beginnings were followed to ancient millet farmers in the Liao River valley. The area includes parts of the Chinese provinces of Liaoning and Jilin, as well as Inner Mongolia. As the ancient farmers moved across northeastern Asia, related languages spread into Siberia, Korea and Japan over thousands of years.

The research highlighted the complex beginnings of modern populations and cultures.

Martine Robbeets is head of the Archaeolinguistic Research Group at the Max Planck Institute for the Science of Human History in Germany. She is also the lead writer of the study that appeared in the publication Nature.

Robbeets said people often think of Japan, Korea and China as powerful nations representing one language, one culture and one people. "But a truth that makes people with nationalist agendas uncomfortable is that all languages, cultures and humans, including those in Asia, are mixed," Robbeets said.

She added, "Accepting that the roots of one's language, culture or people lie beyond the present national boundaries is a kind of surrender of identity, which some people are not yet prepared to make."

The researchers studied data of vocabulary from the 98 languages. They identified a group of words related to agriculture and created a language family tree.

Mark Hudson, a co-lead writer of the study, said the researchers examined data from 255 archaeological sites in China, Japan, Korea and eastern Russia. They studied ancient objects including pottery, stone tools and plant and animal remains. They also included the dating of 269 ancient crop remains from different areas.

The researchers found that farmers in northeastern China eventually grew rice and wheat along with millet. The crops spread along with farming populations to Korea by about 1300 BC and from there to Japan after about 1000 BC.

The researchers performed genetic studies on ancient remains of 23 people and examined data on others who lived in North and East Asia as long as 9,500 years ago.

For example, a woman's remains found in Yokchido in South Korea had 95 percent ancestry from Japan's ancient Jomon people. This suggests her recent ancestors had come from over the sea.

"It is surprising to see that ancient Koreans reflect Jomon ancestry, which so far had only been detected in Japan," Robbeets said.

The origins of modern Chinese languages came about independently, although millet was also involved.

province -- n. any one of the large parts that some countries are divided into

agenda -- n. a plan or goal that guides someone's behavior

uncomfortable -- adj. causing a feeling of being embarrassed or uneasy

boundary – n. something (such as a river, a fence, or an imaginary line) that shows where an area ends and another area begins

prepared – adj. willing to do something

site -- n. the place where something (such as a building) is, was, or will be located

detect -- v. to discover or notice the presence of (something that is hidden or hard to see, hear, taste, etc.)