Update Required To play the media you will need to either update your browser to a recent version or update your Flash plugin.
By Dan Friedell
23 April, 2016


A group of researchers at Rice University in Texas are learning how to help the brain heal from serious injuries.

Brain cells, called neurons, connect with each other through chemical and electrical signals. They form networks. They use proteins to grow.

The researchers want to find out if they can direct the growth of neurons and help them form these important links. If the researchers can understand this process, they think they will be able to help people who have suffered brain injuries stimulate new nerve tissue. 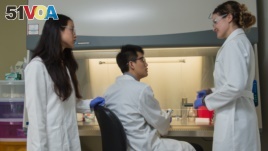 Rice University researcher Amina Qutub is working with a team studying how brain cells make connections with each other.

Amina Qutub is a bioengineer who studies the brain. She studies what happens when a person's brain does not receive enough oxygen. When the brain lacks oxygen, it is having a stroke.

Qutub says scientists used to think brain cells were "static." That means everyone was born with a limited number of brain cells, and the number of those cells could never increase.

"But a lot of new research shows we're able to regenerate nerve cells," she says.

Qutub works with an electrical engineer and a biologist on the research team.

The goal is to learn how to repair parts of the brain that are damaged in a stroke. The brains can be damaged by a degenerative disease like Alzheimer's disease. Or in a traumatic injury, such a getting hit in the head.

The networks the brain forms as called neural networks, and they are complex. Pre-neurons are even harder to understand.

"They form very elaborate and beautiful networks and the different network structures relate to what they do, their function. And what we are trying to do is figure out what are the chemical signals that lead to a particular structure and, in turn, how does that structure lead to the electrical signals you get when you have active neurons."

The Rice research is supported in part by President Barack Obama's $300 million BRAIN Initiative, which is modeled after the Human Genome Project.

Qutub says the research "opens up a huge door to better understanding the brain."

A small, tropical fish is contributing to the research. It is called a zebrafish because of its stripes.

Zebrafish embryos are being used by the research team because their embryos are transparent. That way they can see a living brain work.

Qutub says that is not possible with humans.

"In zebrafish, we can watch the neural progenitor cells become neurons."

The research program will create a computer model. That model will help researchers get a better idea of how the brain works.

One day, they may be able to provide better treatment for people with brain injuries.

Greg Flakus wrote this story for VOANews. Dan Friedell adapted it for Learning English. Kathleen Struck was the editor.

How close are we to being able to help brain cells regenerate? We want to hear from you. Write to us in the Comments section or on 51VOA.COM.

degenerative – adj. causing the body or part of the body to become weaker or less able to function as time passes

elaborate – adj. made or done with great care or with much detail : having many parts that are carefully arranged or planned

embryo – n. a human or animal in the early stages of development before it is born, hatched, etc

neuron – n. a cell that carries messages between the brain and other parts of the body and that is the basic unit of the nervous system

progenitor– n. something that begins the development of something else

static – adj. showing little or no change, action, or progress

stimulate – v. to cause or encourage (something) to happen or develop

traumatic– adj. related to or caused by a severe injury to your body

function– v. to work or operate