Researchers May Have Found New Weapon Against Disease

Update Required To play the media you will need to either update your browser to a recent version or update your Flash plugin.
By Alice Bryant
27 July, 2019


Some bacteria have grown so strong that they cannot be killed with antibiotic drugs. Medical experts call them antibiotic-resistant bacteria.

The World Health Organization says antibiotic-resistant bacteria are one of the biggest threats to human health. But, researchers now say they may have found a way to fight them. 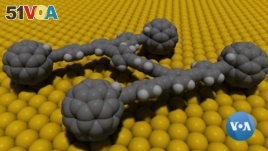 Researchers May Have Found New Weapon Against Disease

A team of researchers from three universities is working on a cell-killing "machine" that is too small for the human eye to see.

"We want to be bacteria's worst nightmare."

That was James Tour, a member of the team. Tour is a chemistry professor at Rice University in Houston. He is also a professor of materials science and nanoengineering and computer science.

In addition to Rice University, the researchers come from Durham University in Britain and North Carolina State University.

The team is experimenting with very small nanomachines that can drill into a cell and kill it. These "machines" are really single molecules that can rotate about three million times a second when near-infrared light shines on them.

"We may have found something that the cell could never build a resistance to."

The team's work is based on the Nobel-prize winning designs of other scientists. In 2016, three researchers received the Nobel Prize in Chemistry for creating the first nanomachines.

But the team's cell-killing nanomachines are much smaller. About 50,000 of them can fit across the width of a human hair. In comparison, only about 50 cells can fit in that amount of space.

The nanomachines could also be effective against another serious health problem: cancer.

The machines can drill into cancer cells, causing the cells' center to break into pieces.

Tour said the team has tried four different kinds of cancer cells, and the nanomachines killed all of them.

The way it works is that a peptide, another kind of molecule, is added to the nano-drill. That peptide recognizes a diseased cell and attaches the nanomachine to it. Then, a special light activates the machine which drills into and kills the cell.

Tour said many nanomachines work together against the diseased cells.

The nanomachines can fight cancer cells in the mouth, upper and lower gastrointestinal areas, bladder and other body parts where light can be shined to start the engines, Tour said.

It would only take a few minutes to kill cancer cells with nanomachines, Tour added. He noted that radiation and chemotherapy take much longer.

In addition to killing bacteria and cancer cells, nanomachines might be used to kill fat cells when placed onto the skin with a gel. Tour said, when you pass the bright light over the problem areas, the machines attack the fat cells.

Test on animals to begin this year

Researchers have only worked with nanomachines in the laboratory. They say using this technology in studies on humans is still some time away. Later this year, researchers will start testing nanomachines on bacterial skin infections on live animals.

As research continues, one problem scientists will have to solve is how to get the light deep into some parts of the body. This would permit the engines to fight bacteria or cancers far below the surface of tissue.

antibiotic – adj. relating to a drug that is used to kill harmful bacteria and to cure infections
nanoengineering – n. the practice of engineering on a scale that is too small for the human eye to see
drill – n. a tool used for making holes in hard substances
rotate – v. to move or turn in a circle
infrared – adj. relating to rays of light that cannot be seen and that are longer than rays that produce red light
pancreatic – adj. relating to a large gland of the body that is near the stomach and that produces insulin and other substances
peptide – n. a compound consisting of two or more amino acids linked in a chain
gastrointestinal – adj. relating to the stomach and the intestines
bladder – n. the organ in the body that holds urine after it passes through the kidneys
gel – n. a thick substance that is like jelly and that is used in many products