Update Required To play the media you will need to either update your browser to a recent version or update your Flash plugin.
By John Russell
26 December 2021


Ancient bells and organ pipes from the Church of the Nativity in Bethlehem gave researchers the idea to re-create music as it may have sounded almost 800 years ago.

David Catalunya, a researcher from the universities of Oxford, England, and Wuerzburg, Germany, is leading a project to build copies of the instruments.

Catalunya said that mid-13th century soldiers, known as Crusaders, buried the 13 bronze bells near the church because they were worried that the instruments might be destroyed. They covered the instruments in animal fat to protect them from rust, he said. 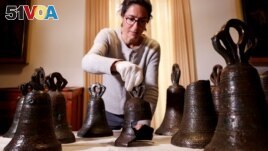 Catalunya described re-creating the bells as "a very long process."

With early research complete, he estimates it will take about five years to make fully usable copies.

Meanwhile, a touch of the hand is enough to bring a clear, high-pitched sound from the originals. The Custody of the Holy Land for the Roman Catholic church holds the rare objects and recently showed them to the Reuters news agency.

"It's half of the original sound, (which) was much richer and louder and a little bit lower," Catalunya said.

The bells were part of a set that played while people sang inside the church, said Franciscan friar Father Stephane, the Custody's liturgist. A liturgist leads church members in ritual prayer.

The bells were discovered in the early 20th century, along with 222 medieval copper pipes from the Church of the Nativity's organ, Father Stephane said. He added that the discovery happened during a building project at the church's Franciscan compound.

The collection also includes the scepter of the Bishop of Bethlehem and candlesticks from the 12th century which, Catalunya said, were made in France.

This suggests a shared source with the bells and organ pipes, which Father Stephane says are the oldest in Christendom.

Father Stephane said he hoped the collection would be displayed, and played, at a Jerusalem museum the Custody plans to open by 2024. He used the term significant – meaning very important – when talking about the bells.

"These bells are very significant for us because they are the bells of Bethlehem (and a) symbol of Nativity in the Christian world," he said.

Rinat Harash reported on this story for Reuters. John Russell adapted it for Learning English. Susan Shand was the editor.

organ – n. a musical instrument that has a keyboard and pipes of different lengths and that makes sound by pushing air through the pipes

original – n. a document, film, painting, etc., which is created by someone and from which a copy or translation is made

symbol –n. an action, object, event, etc., that expresses or represents a particular idea or quality