Update Required To play the media you will need to either update your browser to a recent version or update your Flash plugin.
By Bryan Lynn
02 February 2020


European researchers say they have created a process that can produce oxygen from moon dust.

The process could provide a major source of oxygen for humans taking part in moon exploration activities in the future.

Researchers from the European Space Agency, or ESA, carried out the experiments at a laboratory in the Netherlands. They reported their results in a study published in Planetary and Space Science.

The team says ESA's experimental "plant" was able to successfully produce oxygen from simulated moon dust. The dust is part of a material known as regolith, a top layer of dirt and rock pieces that sit on the surface of the moon. 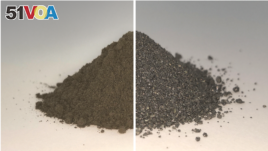 On the left side of this before and after image is a pile of simulated lunar soil, or regolith; on the right is the same pile after essentially all the oxygen has been extracted from it, leaving a mixture of metal alloys. Both the oxygen and metal could b

Samples of regolith returned from the moon have confirmed that the material contains about 45 percent oxygen by weight. However, the oxygen is chemically locked in the form of minerals or glass, so it is not easily available for use.

Having real samples of regolith from the moon made it possible for the researchers to create the simulated moon dust material used during testing.

The oxygen extraction process is carried out using a method called molten salt electrolysis. This involves first placing the regolith in a metal container. Calcium chloride salt is added to the mixture, which is then heated to 950 degrees Celsius. At this temperature, the regolith remains solid.

Next, an electrical current is passed through the material. The researchers say it is this step that results in oxygen being extracted from the regolith. The study reported that up to 96 percent of oxygen in the simulated moon dust was extracted during the experiments.

ESA's long-term goal is to design an oxygen-producing "pilot plant" to operate full-time on the moon. The first technology demonstration of the system is expected to take place in the middle 2020s.

Beth Lomax of the University of Glasgow was a lead researcher on the project. "Being able to acquire oxygen from resources found on the Moon would obviously be hugely useful for future lunar settlers, both for breathing and in the local production of rocket fuel," she said in a statement.

The researchers reported that "as a bonus," the process also results in the production of usable metallic materials.

ESA researcher Alexandre Meurisse said the finding that a number of metals are left behind was an important discovery. "This is another useful line of research, to see what are the most useful alloys that could be produced from them - and what kind of applications could they be put to," he said in a statement.

ESA and the U.S. space agency NASA are both working on plans to return human beings to the moon. NASA has set a goal for 2024, with the aim to keep humans on the moon for long periods.

Last August, NASA's Kennedy Space Center in Florida announced its own plans to develop a device that would melt lunar regolith to extract oxygen.

The NASA plan would involve heating the regolith to more than 1,600 degrees Celsius and then flowing electricity through the material, the agency explained. The process would attempt to cause a chemical reaction to split the regolith into oxygen and metals.

Kevin Grossman is a materials science expert at Kennedy Space Center. He said researchers will be carrying out experiments to test the technology with the goal of getting NASA, in his words, "one step closer to an automated mass production of oxygen on the Moon."

Bryan Lynn wrote this story for VOA Learning English, based on information from the European Space Agency and the University of Glasgow and Planetary and Space Science. Caty Weaver was the editor.

simulated – adj. something that looks and behaves like something real but which is not real

extraction – n. the act of taking something out

bonus – n. something extra that is given but which was not expected

alloy – n. a metal that is a mixture of two or more metals

application – n. a way something can be used in for a particular purpose

automated – adj. operated alone by equipment and not people