Update Required To play the media you will need to either update your browser to a recent version or update your Flash plugin.
By John Russell
14 September 2022


Scientists in Spain have mapped the genetic code of a sea animal that is the only known creature able to go back in its life cycle.

The research involves a kind of jellyfish. The researchers' goals were to try to understand the secret of the jellyfish's unusual long life and find new areas for future aging research.

The scientists published their study recently in the Proceedings of the National Academy of Sciences. Maria Pascual-Torner, Victor Quesada and others at the University of Oviedo mapped the genetic code of Turritopsis dohrnii. It is the only known species of jellyfish able to repeatedly change back into a larval stage after sexual reproduction. The scientists said that means it could be biologically immortal. 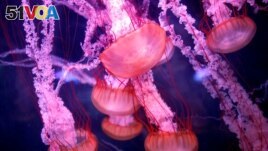 Like other jellyfish, T. dohrnii goes through a two-part life cycle. It lives on the sea floor during an early part of life where its main goal is to survive during times when there is not enough food. Then, when conditions are right, the jellyfish enters another part of its life to reproduce sexually.

Many kinds of jellyfish have some ability to reverse aging and go back to a larval form. But most lose this ability once they reach sexual maturity, the scientists wrote.

Not so for T. dohrnii.

Monty Graham is a jellyfish expert and director of the Florida Institute of Oceanography. Graham was not involved in the research.

"We've known about this species being able to do a little evolutionary trickery for maybe 15-20 years," he said.

In this case, trickery means an unusual behavior or manner.

This trick earned the species the nickname, the immortal jellyfish. Graham admits the nickname is a little hyperbolic, meaning it overstates the truth.

The study aimed to understand what made this jellyfish different. It compared the genetic code of T. dohrnii to a close genetic relative that does not have the same ability.

Researchers found that T. dohrnii has differences in its genes that may make it better at copying and repairing DNA. Such differences, or variations, also appear to make the jellyfish better at taking care of the ends of chromosomes called telomeres. In humans and other species, telomere length has been shown to shorten with age.

Graham said the research has no immediate financial value.

"We can't look at it as, hey, we are going to harvest these jellyfish and turn it into a skin cream," he said.

The research has more to do with understanding the processes that help these jellyfish live so long.

Graham explained, "It's one of those papers that I do think will open up a door to a new line of study that's worth pursuing."

Julie Steenhuysen reported on this story for Reuters. John Russell adapted it for VOA Learning English.

code – n. a set of instructions for a living organism or a computer

life cycle -- n. the series of stages through which a living thing passes from the beginning of its life until its death

larval – adj. a very young form of an insect or other creature

pursue –v. to make an effort to find out more about some subject or issue