Update Required To play the media you will need to either update your browser to a recent version or update your Flash plugin.
By Anne Ball
08 January, 2017


Liver cancer is the sixth most common cancer in the world, and now researchers are developing new forms of treatment.

If tests show you have liver cancer, there are several ways to treat the disease. One is removing the cancerous part of the liver. The other is having doctors replace the organ through a transplant operation. 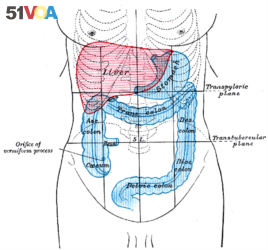 The liver cleans the blood and helps remove toxins from the body. (From the book Anatomy of the Human Body; illustrator Henry Vandyke Carter, 1918.)

Patients who get someone else's liver must take immuno-suppressant drugs the rest of their life. The drugs keep the body from rejecting the new organ. There may be serious side effects that come with taking those powerful medicines.

Chemotherapy and radiation treatments are also used to treat liver and other cancers. Those treatments require the patient to take strong drugs or exposure to radiation. The drugs or radiation destroy the cancer cells. But then, the healthy cells around the tumor are damaged.

Now scientists are working on an experimental, minimally invasive treatment. They say it reduces the chances of harming the patient.

This treatment involves the use of natural, non-poisonous chemicals from plants. That is why the researchers call it a "green" method for fighting cancer.

Kattesh Katti is a professor of radiology and physics at the University of Missouri's School of Medicine. For more than 10 years, he has studied the use of nanotechnology to fight cancer.

Nanotechnology is the science of making things unimaginably small. For this study, Katti used extremely small objects to target and destroy precancerous tumor cells in the livers of mice and human cells in the laboratory.

Kattesh Katti used very small particles of gold. The gold was covered in a protective material called gum arabic. It comes from an acacia tree. He says the particles attract precancerous and cancer cells. Those cells are far more affected by lower levels of heat than healthy cells.

Once the particles travel to and connect with the cells, they are heated with a laser. That destroys the cancer cells, but the healthy ones around them live.

Katti explains how the treatment would work on a human patient.

What that means is the patient would not have the same side effects one can have from radiation and chemotherapy. Chemotherapy drugs often are toxic. While they kill off the cancer tumors, they are also poisonous to the healthy cells and the patient can get very sick.

Katti says the cost of treatment will be low because one gram of gold can be used to treat 50 patients. He says this form of treatment could be used for other types of cancer, arthritis and other diseases.

The next step is testing in human subjects.

More than 80 percent of the liver cancer cases are found in less developed countries, with the highest numbers in Asia and Africa.

In the United States, liver cancer is one of the top 10 cancers that kill.

immuno-suppressant – n. a substance that control's someone's immune response to a foreign organ in their body

chemotherapy – n. treatment for disease like cancer that uses strong chemicals to kill the disease

fairy tale – n. a children's story with magical creatures that is not true and usually has a happy ending

exposure – n. the fact or condition of being affected by someone or something else; public attention

attract – v. to pull toward oneself or itself