Update Required To play the media you will need to either update your browser to a recent version or update your Flash plugin.
By Hai Do
13 August 2022


International scientists warn that the world's largest ice sheet in Antarctica is losing ice much more quickly than they had thought.

A recent study by Australian and other researchers described what could happen if targets to limit global temperature increases are not met.

Nerilie Abram is a professor at the Australian National University's Research School of Earth Sciences. She was a co-writer of a study that recently appeared in the publication Nature. She warned that the melting of the East Antarctic Ice Sheet could be disastrous. 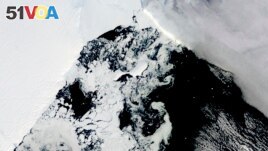 This satellite image provided by NASA, Aqua MODIS 21 on March 2022 shows the two pieces of C-38 (A and B icebergs) next to the main piece of C-37 at the top. East Antarctica, an area that had long been thought to be stable, recently collapsed.(Dr. Shuman, UMBC/NASA)

Abram said, "By 2500, East Antarctica could contribute up to 5 meters of sea level [rises] on top of the sea level rise that we will already have had from Greenland and West Antarctica."

The East Antarctic Ice Sheet holds the majority of world's glacier ice. It was thought to be less affected by worldwide temperature rises compared to the ice sheet in West Antarctica or Greenland.

The study by Abram and other researchers says that if the temperature rise is limited to 2 degrees Celsius, the East Antarctic Ice Sheet should remain stable. In other words, it should remain generally the same size. But the researchers warn that warmer temperatures could cause more melting and increase worldwide sea level by many meters.

Abram said, "It gives us even more of a reason to make sure that we are doing everything that we can to not exceed that 2-degree warming level."

The Paris Climate Agreement, signed in 2015, aims to limit global warming to under 2 degrees Celsius.

Another Antarctica study published in Nature drew from research by scientists at NASA's Jet Propulsion Laboratory (JPL) in California. The scientists found that the edge of the East Antarctic Ice Sheet has been losing ice faster than natural processes can replace it.

The edges of an ice sheet are known as ice shelves. They extend from the ice sheet into the water. They are permanent floating sheets of frozen freshwater.

Ice shelves take thousands of years to form. They hold back glaciers that would otherwise easily fall into the ocean and cause sea levels to rise.

For the JPL study, the researchers examined over 50,000 kilometers of the Antarctic coastline. They found that the loss of ice from coastal glacier pieces breaking off into the ocean was nearly the same as the loss of ice due to thinning of the continent's large ice shelves. The thinning of the ice is a result of warming ocean water underneath.

"Antarctica is crumbling at its edges," said JPL scientist Chad Greene, a lead writer of the study.

Eric Wolff is a professor at the University of Cambridge in Britain. He said of the JPL study, "if we keep to the 2 degrees of global warming that the Paris agreement promises, the sea level rise due to the East Antarctic ice sheet should be modest."

But, he said, failure to limit global warming and reduce greenhouse gas emissions, would risk "many meters of sea level rise over the next few centuries."

Hai Do wrote this story for Learning English with materials from VOA News and NASA's JPL.

contribute - v. to help to cause something to happen

stable - adj. in a good condition that is not likely to change

glacier - n. very large area of ice that moves slowly down an area

modest - adj. not very large in size or amount