Update Required To play the media you will need to either update your browser to a recent version or update your Flash plugin.
By Dan Friedell
29 June 2021


The search continues for survivors of a building collapse near Miami, Florida on June 24. At least 11 people died when parts of the 12-floor-building fell. And 150 remain missing.

As each day passes, the chance of finding people alive in the building known as Champlain Towers South decreases.

Now people who live nearby in Champlain Towers North are wondering if they should leave. North was built in 1982, one year after South, by the same company, using the same materials and a similar design. Just one block away, the nearly 40-year-old building has also faced the same seawater and salty air as South.

Charles Burkett is the mayor of Surfside, the town that is home to the two buildings. He said a quick inspection of the North building done after the South's collapse did not show any problems. But that did not make everyone feel safe. 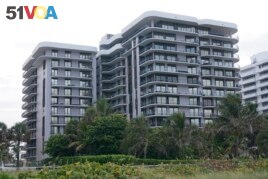 Champlain Towers North North was built in 1982, one year after South, by the same company, using the same materials and a similar design. Just one block away, the nearly 40-year-old building has also faced the same seawater and salty air as South. (AP Photo)

Rebecca Weinstock owns an apartment in Champlain Towers North. She was in New York when South fell. "I'm petrified of returning," she said.

Weinstock said she will only return if two independent building engineers, not from Florida, agree the building is safe.

Philip and Nora Zyne said about 25 percent of North residents have left the building, but they are staying in their fifth-floor apartment. "I'm not worried at all right now," Philip Zyne said. But he added that he wants a full engineering and scientific review of the building.

Salomon Gold has been one of the leaders of the building's resident organization for 20 years. He said he and the others always worked to keep the building safe. He compared the two buildings to two similar airplanes made by the same company. He said just because one crashes does not mean the other will. "We are in good shape," Gold said.

Burkett, the Surfside mayor, said a detailed inspection of the North building started on Tuesday. The town is also starting inspections of other older buildings.

He does not see a reason to tell people to leave the North building. He did, however, say he understands why people might want to leave.

Esther Drachmann said her husband's 91-year-old mother lives in the building. She and her husband took the older woman to their home.

She said her husband's mother would not be able to get out in time if residents had to leave quickly. Drachmann said the woman would return if inspectors say the building is safe.

Leaders of other cities in South Florida are also working to find out if older buildings in the area have been keeping up with repairs and inspections.

Dan Friedell adapted this story for Learning English based on an Associated Press report. Hai Do was the editor.

petrify –adj. very afraid or frightened of something