Update Required To play the media you will need to either update your browser to a recent version or update your Flash plugin.
By Jonathan Evans
01 April, 2018


The United Nations Children's Fund says Nigeria has the largest number of child brides in Africa. The custom of young girls marrying much older men happens mostly in the Muslim-majority northern states. Girls in the area are usually married by their early teens, whether they want to be or not. Conservative Islamic groups in the area resist efforts to ban child marriage. But times are changing.

Hajia Rabi Salisu is the founder of Arrida Relief Foundation and owner of a children's home in Kaduna. She says that girls are increasingly "running away from child marriages."

Salisu and other activists want states to ban marriage before the age of 18. She says she receives death threats because of her activism.

She told VOA, "I sleep in a different home almost every night because my life is at stake simply for trying to protect the lives of children." 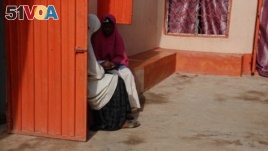 Rahmatu and Naja'atu, both 14, are runaway brides. They say they hope their parents will eventually forgive them for running away. (C. Oduah/VOA)

Rahmatu Ibrahim and Naja'atu Abdullahi are both 14 years old. Both girls ran away from their homes so they would not have to get married. They met at Salisu's home for children.

Rahmatu says, "I was being forced into an arranged marriage. That was why I ran away. I don't love him and I don't know him. I had never seen him before..."

Naja'atu told VOA she wants to get an education.

In another village in Kaduna State, VOA spoke with 18-year-old Sumayya Musa. She has resisted the expectations of her community.

She said, "My father wanted me to get married when I was 13, but my mother said no, because she was in support of my decision to further my education."

She added, "People here in this village laugh at me because I am not yet married."

She said that used to make her cry sometimes. But, she said, when she thinks about how her education will better her life, she stops crying.

Nigerian lawmakers have been debating marriage customs for more than 20 years. The country's 2003 Child Rights Act says that people must be at least 18 years old to marry. But individual states can decide whether to approve the law. Most northern Nigerian states have not.

Muslim rights groups have been meeting with northern lawmakers to express their concerns. Some activists propose a law that requires a person be at least 15 to marry. But that idea offends Awwal Tesleem Shittu. He is a member of the Muslim Lawyers Association of Nigeria.

He argues that a girl's readiness for marriage cannot be decided by her age. He says some 15-year-olds might not be ready for marriage while some girls as young as nine might be. He says "in Islam there is no barrier to that."

In 2013, a social media campaign #ChildNotBride began to spread in Nigeria after senator and former governor Ahmad Sani Yerima was accused of marrying a 13-year-old girl. Yerima denied the accusation, but would not tell his wife's age. Yerima also supported a law that would legally recognize any married female as an adult.

In 2014, a 14-year-old girl in Kano admitted to killing her 35-year-old husband with poison. Police said the girl's father had forced her to marry. Later, the murder charges were withdrawn.

Activist Mustapha Wakil says, "They just want to take these girls off their hands as fast as possible." He notes that financially poor parents have been accepting unusually low dowries. Some are as little as $8. Parents used to request at least $112.

Wakil is campaigning for his state of Yobe to pass the federal Child Rights Act. He says the current laws on marriage are not clear.

Rahmatu and Naja'atu want to hold on to their childhoods a little longer. They are attending school and hope their families will one day forgive them for running away.

Chika Oduah reported this story for VOA News. Jonathan Evans adapted it for Learning English. Caty Weaver was the editor.

at stake – n. in a position to be lost or gained

dowry – n. money or property that a wife or wife's family gives to her husband when the wife and husband marry in some cultures

arranged marriage – n. a marriage in which the husband and wife are chosen for each other by their parents