Update Required To play the media you will need to either update your browser to a recent version or update your Flash plugin.
By VOA
19 November, 2015


What's more important: Your employee or your customer?

A popular business expression is, "The customer is always right."

But you should never say "always."

The owners of a restaurant in Alaska won international praise after defending their autistic employee.

Autism is a disorder that makes relationships and talking to others difficult.

When the employee delivered the wrong food to a customer's house, that customer reacted severely and unkindly. Even after the employee corrected the mistake, the customer continued to yell. 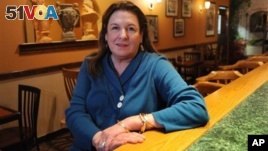 Little Italy Restaurante co-owner P.J. Gialopsos and her husband Spiro were praised for defending an autistic employee who was yelled at by an angry customer.

And that same customer cursed and used "foul language" with the restaurant owners' daughter.

So the owners "fired" the customer.

Restaurant owners P.J. and Spiro Gialopsos have added the customer to the restaurant's "Do Not Deliver" list. That customer is now persona non grata, Latin for "an unwelcomed person."

P.J. Gialopsos wrote on the restaurant's Facebook page, "you would think in the year 2015 the majority of the population would have learned or at least heard about autism."

Gialopsos said the employee has worked at the Little Italy Restaurante in Anchorage, Alaska, for two years. She said the worker was very upset about the angry customer.

Gialopsos describes the employee as a seriously gifted university student who is curious about the world. She adds that the employee also has "an amazing personality," great sense of humor and a strong work ethic.

This employee is also one who will not have to deal with that "rude customer" anymore, said Gialopsos.

Reached at home by VOA, Gialopsos said she is happy about the positive comments she and her husband are receiving.

By Tuesday afternoon, her Facebook posting about the incident received more than 30,000 "Likes" and hundreds of positive comments. Comments and emails came from Australia, the United Kingdom, Ireland, Namibia and the United Arab Emirates.

Gialopsos said she spent a couple of emotional days crying over the posts on the Facebook page.

She adds that many parents from around the country who have children with spectrum disorders wrote to her about the incident. She said, "Their stories hurt my heart."

A spokesperson for a group serving people with autism wrote: "Thank you Little Italy for shining a spotlight on autism and for hiring people whom others may not."

Another comment on Facebook that she found "striking" is a woman who thanked them for hiring someone who is "differently-abled."

We want to hear from you. Write to us in the Comments section or share your views on how this restaurant owner handled the attack on her employee on 51VOA.COM.

autistic – adj. a condition or disorder that begins in childhood and that causes problems in forming relationships and in communicating with other people

fire – v. to dismiss (someone) from a job or position

rude – adj. not having or showing concern or respect for the rights and feelings of other people, not polite

striking – adj. unusual or extreme in a way that attracts attention