The Return of a Private by Hamlin Garland


Our story today is called, "The Return of a Private. " It was written by Hamlin Garland. Here is Harry Monroe with our story.

The soldiers cheered as the train crossed the border into the state of Wisconsin. It had been a long trip from the south back to their homes in the north.

One of the men had a large red scar across his forehead. Another had an injured leg that made it painful for him to walk. The third had unnaturally large and bright eyes, because he had been sick with malaria.

The three soldiers spread their blankets on the train seats and tried to sleep. It was a cold evening even though it was summertime. Private Smith, the soldier with the fever, shivered in the night air. 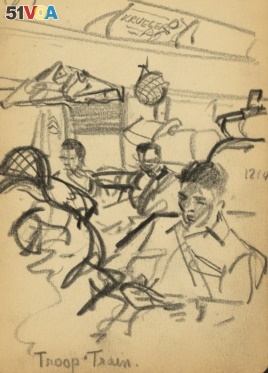 His joy in coming home was mixed with fear and worry. He knew he was sick and weak. How could he take care of his family? Where would he find the strength to do the heavy work all farmers have to do? He had given three years of his life to his country. And now he had very little money and strength left for his family.

Morning came slowly with a pale yellow light. The train was slowing down as it came into the town of La Crosse where the three soldiers would get off the train. The station was empty because it was Sunday. "I'll get home in time for dinner," Smith thought. "She usually has dinner about one o'clock on Sunday afternoon," and he smiled.

Smith and the other two soldiers jumped off the train together. "Well, boys," Smith began, "here's where we say good-bye. We've marched together for many miles. Now, I suppose, we are done." The three men found it hard to look at each other.

"We ought to go home with you," one of the soldiers said to Smith. "You'll never be able to walk all those miles with that heavy pack on your back."

"Oh, I'm all right," Smith said, putting on his army cap. "Every step takes me closer to home."

Smith turned and walked away quickly. After a few minutes, he turned again and waved his cap. His two friends did the same. Then they marched away with their long steady soldier's step. Smith walked for a while thinking of his friends. He remembered the many days they had been together during the war.

He thought of his friend, Billy Tripp, too. Poor Billy! A bullet came out of the sky one day and tore a great hole in Billy's chest.

Smith knew he would have to tell the sad story to Billy's mother and young wife. But there was little to tell. The sound of a bullet cutting through the air. Billy crying out, then falling with his face in the dirt.

The fighting he had done since then had not made him forget the horror of that moment when Billy died.

Soon, the fields and houses became familiar. Smith knew he was close to home. The sun was burning hot as he began climbing the last hill. Finally, he reached the top and looked down at his farm in the beautiful valley. He was almost home.

Misses Smith was alone on the farm with her three children. Mary was nine years old. Tommy was six and little Teddy had just turned four.

Misses Smith had been dreaming about her husband, when the chickens awakened her that Sunday morning. She got out of bed, got dressed and went out to feed the chickens. Then she saw the broken fence near the chicken house. She had tried to fix it again and again. Misses Smith sat down and cried.

The farmer who had promised to take care of the farm while her husband was away had been lazy and dishonest. The first year he shared the wheat with Misses Smith. But the next year, he took almost all of it for himself. She had sent him away. Now, the fields were full of wheat. But there was no man on the farm to cut it down and sell it.

Six weeks before, her husband told her in a letter that he would be coming home soon. Other soldiers were returning home, but her husband had not come. Every day, she watched the road leading down the hill.

This Sunday morning she could no longer stand being alone. She jumped up, ran into the house and quickly dressed the children. She carefully locked the door and started walking down the road to the farmhouse of her neighbor, Misses Gray. 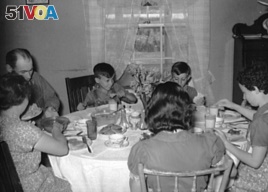 Mary Gray was a widow with a large family of strong sons and pretty daughters. She was poor. But she never said 'no' to a hungry person who came to her farm and asked for food. She worked hard, laughed often and was always in a cheerful mood.

When she saw Misses Smith and the children coming down the road, Misses Gray went out to meet them. "Please come right in, Misses Smith. We were just getting ready to have dinner."

Misses Smith went into the noisy house. Misses Gray's children were laughing and talking all at the same time. Soon she was laughing and singing with the rest of them.

The long table in the kitchen was piled with food. There were potatoes, fresh corn, apple pies, hot bread, sweet pickles, bread and butter and honey. They all ate until they could eat no more. Then the men and children left the table. The women stayed to drink their tea.

"Mamma," said one of Misses Gray's daughters. "Please read our fortunes in the tea leaves! Tell us about our futures!"

Misses Gray picked up her daughter's cup and stirred it first to the left, then to the right. Then she looked into it with a serious expression. "I see a handsome man with a red beard in your future," she said. Her daughter screamed with laughter.

Misses Smith trembled with excitement when it was her turn. "Somebody is coming home to you," Misses Gray said slowly. "He's carrying a rifle on his back and he's almost there."

Misses Smith felt as if she could hardly breathe. "And there he is!" Misses Gray cried, pointing to the road. They all rushed to the door to look.

A man in a blue coat, with a gun on his back, was walking down the road toward the Smith farm. His face was hidden by a large pack on his back.

Laughing and crying, Misses Smith grabbed her hat and her children and ran out of the house. She hurried down the road after him, calling his name and pulling her children along with her. But the soldier was too far away for her voice to reach him.

When she got back to their farm, she saw the man standing by the fence. He was looking at the little house and the field of yellow wheat. The sun was almost touching the hills in the west. The cowbells rang softly as the animals moved toward the barn.

"How peaceful it all is," Private Smith thought. "How far away from the battles, the hospitals, the wounded and the dead. My little farm in Wisconsin. How could I have left it for those years of killing and suffering?"

Trembling and weak with emotion, Misses Smith hurried up to her husband. Her feet made no sound on the grass, but he turned suddenly to face her. For the rest of his life, he would never forget her face at that moment. 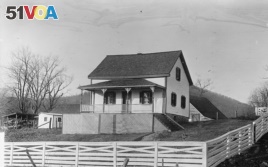 The children stood back watching their mother kissing this strange man. He saw them, and kneeling down he pulled from his pack three huge, red apples. In a moment, all three children were in their father's arms. Together, the family entered the little unpainted farmhouse.

Later that evening, after supper, Smith and his wife went outside. The moon was bright, above the eastern hills. Sweet, peaceful stars filled the sky as the night birds sang softly, and tiny insects buzzed in the soft air.

His farm needed work. His children needed clothing. He was no longer young and strong. But he began to plan for next year. With the same courage he had faced the war, Private Smith faced his difficult future.

You have just heard the story, "The Return of a Private." It was written by Hamlin Garland, and adapted for Special English by Dona de Sanctis. Your narrator was Harry Monroe.

scar - n. a mark that is left on your skin after a wound heals

forehead - n. the part of the face above the eyes

malaria - n. a serious disease that causes chills and fever and that is passed from one person to another by the bite of mosquitoes

mood - n. the way someone feels : a person's emotional state

pickle - n. chiefly US: a cucumber that is preserved in salt water or vinegar barn - n. a building on a farm that is used for storing grain and hay and for housing farm animals or equipment

courage - n. the ability to do something that you know is difficult or dangerous