Riding Shotgun: Not As Dangerous As It Sounds

Update Required To play the media you will need to either update your browser to a recent version or update your Flash plugin.
By Anna Matteo
09 March, 2019


And now Words and Their Stories from VOA Learning English!

The term Wild West describes life in what is now the western United States way back in the 1800s. Life there was often unpredictable and even, well, wild!

Native Americans already controlled land that white settlers wanted to occupy. So it could be a very dangerous place – for everyone! Many people carried guns.

Life in the Wild West has given us many expressions that will still use today. Some involve things that were widely used back then, like horses and guns.

Today we talk about one of them: a shotgun.

Shotguns are designed to fire a large number of small metal balls or pellets. They travel down a long barrel before they fly out of the gun. A shotgun can hit many objects in a wide area. So, this weapon is good for hunting small moving targets, such as squirrels and birds.

This also made the shotgun good for protection. And that is just how settlers used shotguns during this period in American history. 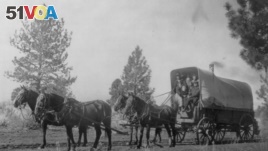 At the time, people traveled in stagecoaches and covered wagons, often through dangerous areas. Next to the driver in these vehicles sat a person holding a shotgun. That person's job was to guard against robbers or angry Native Americans.

These days, riding shotgun still means you are sitting next to a driver, but without a shotgun.

In a vehicle, the seat next to the driver is roomy. Sitting there, you can see the world around you better than people in the back seat. It is easier to talk to the driver. And you have access to the music player and climate controls.

So, to guarantee that you get this good seat before a car ride, you can call shotgun. In other words, you are claiming, or calling dibs on, the seat next to the driver.

This is a fairly common expression in American English. But it is very casual and somewhat humorous. So, we usually say it only to our very good friends.

I would not, for example, call shotgun on a drive with the head of my office or my mother's friend, who is probably 80 years old. That would be a sign of bad behavior. The older adult should get to choose where they sit.

I would even think twice before calling shotgun with a new group of friends. It could sound childish. Instead I might say, "Would you mind if I sit up front?"

And that brings us to the end of this Words and Their Stories. Until next time, I'm Anna Matteo.

pellet – n. a small metal object that is shot from a gun