Human rights groups are reporting an increase in the number of executions in Saudi Arabia. Saudi executions are usually beheadings, where the prisoner is killed in a public place. Some observers say the increase could be a show of force by the government. They say Saudi officials are seeking to keep the kingdom safe from a security crisis in other countries.

Last week, Saudi Arabia executed its 89th prisoner this year. That is almost equal to the number killed in all of 2014. Adam Coogle studies Middle East issues for Human Rights Watch. He says Saudi officials have given no reason for the increase.

"Saudi Arabian authorities do not comment publicly on this issue other than to say that under Islamic Law it is their right to carry out executions. Because they do not release information, we really do not know for sure why there has been a rise in the number of those executions over the last, really eight to nine months." 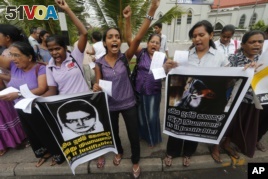 Sevag Kechichian is a Saudi Arabia expert with the rights group Amnesty International. He says the increased number of executions may be a product of unrest in the area.

"The theory is the reason why the Saudi authorities have been carrying out executions at such a rate is because they want to signal to ISIS, to others in the region, that they are quite in charge or in control of what is going on inside the country and that they will punish transgressions extremely harshly. It is sort of a show of power."

There are competing theories to explain the increase, he adds, like increased efficiency in the judiciary.

Most executions are carried out in public spaces, and the condemned are beheaded. Sometimes, the bodies are left lying in the open.

Twenty-two countries permit execution as a form of punishment. Saudi Arabia is often on the list of the top five countries that perform the most executions. The other four are China, Iran, Iraq and the United States.

Adam Coogle of Human Rights Watch says there is strong evidence that Saudi courts do not meet international norms for fair trials.

"Some people allege that they were coerced into confessing. Some people claim they had difficulty accessing lawyers. One of the big issues is the defendants not actually initially knowing the charges against them, until after they have actually been brought before a judge."

He adds that nearly half of all executions in Saudi Arabia are for crimes related to drug trafficking. And he says some people are executed for other non-violent crimes, like having sex with someone other than your husband or wife.

Last year, Shia Sheikh Nimr al-Nimr was sentenced to death. The sentence was announced after he was accused of disobeying the ruler and inciting religious violence. He also was accused of supporting and leading demonstrations. His case fueled protests around the world.

If al-Nimr is executed, tensions could increase between Sunni and Shi'ite Muslims in Saudi Arabia and other countries.

But a Kuwait-based observer, Haidar Ghadhanfari, thinks the execution is unlikely. He notes recent Saudi efforts to reach out to the country's Shia minority.

Amnesty's Sevag Kechichian says the possibility for political unrest could delay or cancel the execution. He claims that al-Nimr's trial had a political motive and lacked strong evidence. Even so, some officials appear ready to carry out the sentence.

Heather Murdock reported on this story from Cairo, Egypt. George Grow adapted it for Learning English. Jill Robbins was the editor.

beheading(s) – n. cutting off the head of someone as a punishment

transgression(s) – n. a violation of the law; wrongdoing; mistake

coerce(d) – v. making someone do something by use of force or threats

confess(ing) – v. to admit that you did something wrong or illegal

motive - n. a reason for doing something