Update Required To play the media you will need to either update your browser to a recent version or update your Flash plugin.
By Jonathan Evans
09 July 2022


Glaciers in Europe's Alps Mountains are becoming more unstable and dangerous because of rising temperatures linked to climate change.

A glacier is a large body of ice that slowly moves down a mountain or over a wide area of land.

The warming of the earth's atmosphere is reawakening what were considered inactive ice masses. 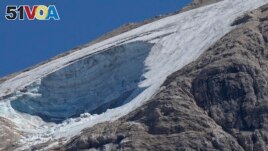 A rescue helicopter hovers over the Punta Rocca glacier near Canazei, in the Italian Alps in northern Italy, July 4, 2022, a day after a huge chunk of the glacier broke loose, sending an avalanche of ice, snow, and rocks onto hikers.

Italy has experienced early and severe summer heat. Many people are concerned about the effects of a severe lack of rain on crops in the Po Valley.

In the Dolomite Mountains, a glacier recently collapsed on the Marmolada peak. At least seven people died. Many others are missing.

"This summer 2022 risks being the perfect storm for glaciers," said Giovanni Baccolo. He is an environmental scientist and glacier expert at Milan-Bicocca University. Baccolo noted a lack of winter snow and a hot start to the summer affecting glaciers.

"Nobody could have expected a glacier like the Marmolada to react like this," he told Reuters. "It is a kind of climatic fossil, glaciers like the Marmolada are considered 'placid.'" Placid is a term that means calm and peaceful.

"High elevation glaciers such as the Marmolada are often steep and relying on cold temperatures below zero degrees Celsius to keep them stable," said Poul Christoffersen. He is a professor at the University of Cambridge who studies glaciers.

Christoffersen said that climate change melts more water, "which releases heat that warms up the ice if the water re-freezes." He added that a worse effect would be the lifting of the glacier from the rock below, "causing a sudden unstable collapse."

Baccolo said that climbers heading into the mountains to escape the summer heat should be careful about where they go.

"The invitation I want to make to those who go to the high mountains this summer is to use much more caution," he said. "The problem is that it may no longer be enough to read the signs from the glacier that have been read so far," he added.

unstable –adj. not held in a secure position, likely to move or fall

peak –n. the pointed top of a mountain

steep –adj. rising or falling very sharply almost straight up and down

rely –v. to need or be dependent on something for support