Update Required To play the media you will need to either update your browser to a recent version or update your Flash plugin.
By Susan Shand
26 September, 2017


Russia will block access to Facebook next year unless the social network follows a law requiring the use of Russian servers to store personal data of Russians.

The threat was made by Roskomnadzor, the agency overseeing communications, information and media in Russia.

Alexander Zharov is head of the agency. He said companies that do not follow the law will no longer work in the Russian Federation, according to the Interfax news agency. 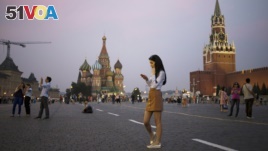 "There will be no exceptions," he said.

The announcement came several days after Facebook said accounts with Russian ties bought advertisings related to the 2016 U.S. election. Facebook has agreed to share the ads with U.S. Congressional investigators.

Zharov also said that Facebook has a large number of users in the Russian Federation. He added that Facebook is not unique, however, and there are other social media websites that Russians can use.

Last November, the Russian agency blocked access to LinkedIn's website. It said LinkedIn was guilty of violating the law. The law was approved by President Vladimir Putin and enacted in 2015.

Twitter, another social network, had already told Roskomnadzor that it would use servers in Russia by June or July of 2018.

Susan Shand adapted this story for Learning English based on Reuters news reports. Hai Do was the editor.

access - n. permission or the right to enter, get near, or make use of something or to have contact with someone

exception – n. a case where a rule does not apply

enact – v. to become part of the law