Robot Helps Create Online Artwork that Will Be Sold

Update Required To play the media you will need to either update your browser to a recent version or update your Flash plugin.
By Bryan Lynn
22 March 2021


An artwork jointly created by a robot and a human artist will go on sale this week.

The artwork -- known as an NFT -- is to be sold during an online auction on Tuesday. NFT stands for non-fungible token. It is a piece of art that only exists on a computer technology known as blockchain.

A blockchain is an online database containing information that can be used and shared within a large network open to the public. The technology permits blocks of information to be checked and stored safely.

NFTs can exist in the form of images, video, music and text. They are usually bought with electronic money. While anyone can view NFTs, the buyer has official ownership rights over the objects.

NFTs have recently been growing in popularity among investors and collectors. Earlier this month, an artwork in the form of an NFT sold for nearly $70 million. 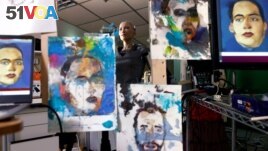 Humanoid robot Sophia, developed by Hanson Robotics, is reflected in a mirror between paintings before auctioning her own non-fungible token (NFT) artwork, in Hong Kong, China March 16, 2021. REUTERS/Tyrone Siu

The piece to be sold this week was a cooperative effort between a human-like robot, known as Sophia, and Italian artist Andrea Bonaceto. Bonaceto's work includes colorful pictures of famous people.

The company behind Sophia, Hanson Robotics, says the auction will be the first sale of a piece jointly created by a human artist, a robot and artificial intelligence (AI).

In a video from the company's Hong Kong headquarters, Sophia said: "I hope the people like my work, and that humans and I can collaborate in new and exciting ways going forward."

The artwork, called Sophia Instantiation, is a 12-second video file. It combines online and physical paintings from Sophia with elements from Bonaceto's work. The artwork also includes influences from art history.

Sophia described the process as a mix of algorithms and AI methods, and "other kinds of computational creativity." The result was an unusual creation "that never existed in the world before," the robot added.

The digital artwork will come with a physical artwork created by Sophia on a printed copy of the online piece.

The online auction is to be held by a company called Nifty Gateway. After the sale, Sophia will meet with the buyer to study his or her face, before adding a final element to the artwork.

Sophia's creator, David Hanson, told Reuters news agency this part of the project will permit the new owner to have an unusual "personal connection" to the artwork.

Bonaceto said he hopes his collaboration with Sophia will "make a statement in the art world, and even the technology world," about the way robots and humans can cooperate in the future.

Sophia's art could be "a very, very important historical piece," said Pablo Fraile, a Miami-based art collector and expert in NFTs. "It's the first time these ideas are put together," he said.

print – v. to cause (words, images, etc.) to appear on paper or cloth by using a machine (called a printer)