Update Required To play the media you will need to either update your browser to a recent version or update your Flash plugin.
By VOA
16 November, 2014
51VOA听写整理，转载请注明出处。文本仅供参考，欢迎纠错！

Five years ago, the Mars Rover Spirit got stuck in sand on the red planet. Spirit is one of the American space agency's two motorized vehicles on Mars.

Recently, the other vehicle – Curiosity -- had to go a long way to avoid another sandy area. These incidents led some scientists to develop ways to keep the costly robots from being trapped in the sand. These scientists looked to nature for their ideas.

The researchers flew deadly snakes to Zoo Atlanta in Atlanta, Georgia. The snakes, called sidewinder rattlers, are native to the southwestern United States. 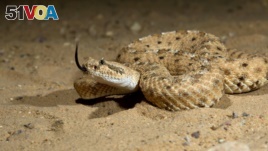 The creatures were put in a specially designed sandbox with inclines that could be raised up or lowered. The scientists used high-speed video cameras to record the position of the snakes as they moved sideways up different inclines. Their movement is called sidewinding.

Daniel Goldman teaches physics at the Georgia Institute of Technology in Atlanta. He says the snakes moved easily in the sand -- even when the sand began moving.

Mr. Goldman and other researchers wrote about their findings in the journal Science. They are said to be the first to explain this kind of snake movement.

"We noticed that the animals were in fact sidewinding, using the same kind of pattern of sidewinding they use on hard ground, but laying instead of only a few points of contact on the body contacting the ground, they were essentially laying more and more snake body down on the hill as the incline angle increased."

Researchers then performed experiments with a robot developed at Carnegie Mellon University in Pennsylvania. The robot is called MOD-Snake. It is one meter long, and has 16 parts or modules. Each module is 6 centimeters wide.

Daniel Goldman says the robot has a long history of getting in and out of tight places. Researchers wanted to get the MOD-Snake to climb in the same way as the sidewinder rattlers.

"And those same waves existed in the robot and allowed it to make its maneuvers and allowed us to modify those waves to make the kind of maneuvers that the snake did on sand dunes of different inclines -- that is, laying down more robot as the hill angle increased."

The researchers performed the same experiment with other snakes closely related to the rattlers. But all of those creatures failed to slide up the inclines.

Joe Mendelson is research director at Zoo Atlanta. He says the robot model helped explain why those snakes have trouble climbing.

Mr. Mendelson adds that the next generation of Mod-Snake may be used to save lives or explore unexplored areas on Earth or even in space.

"Robots are expensive. And a robot gets stuck in the sand, that's a problem. And you realize, part of going into this, we realize that sidewinders never ever, ever get stuck on sand!"

The researchers hope the new sidewinder robot will travel up and down sand dunes just as well.