Robotic Hand Can Be Updated to Meet User’s Needs

Update Required To play the media you will need to either update your browser to a recent version or update your Flash plugin.
By Bryan Lynn
19 August 2022


A British company has developed a robotic hand that it says can be updated to perform new actions required by the user.

The device, also known as a bionic hand, is designed to work like a human hand. It uses electrical signals from muscles in the upper arm to power motors built into the device.

Bionic hands can help users pick up and hold onto things. Many are designed only to do specific tasks. Others can be programmed to perform additional actions. 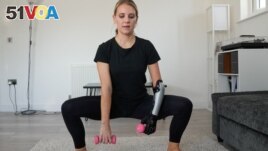 Jessica Smith, a former Australian Paralympic Swimmer, poses for a picture during a workout while using her new bionic hand that improves the speed of movement and sensitivity of touch, according to the company, in London, Britain August 12, 2022. (REUTERS)

The British company, Covvi, developed the robotic hand called Nexus. It says the device can be updated through a computer application program, or app, remotely from anywhere in the world.

Simon Pollard started Covvi five years ago. He told Reuters news agency the company is now providing users with the ability to request new actions to be added to the Nexus device.

Nexus uses the wireless technology Bluetooth to permit the company's specialists to update the bionic hand for users.

"The fact we can change some of the things that the customer wants remotely is a really powerful thing and a first to market," Pollard said.

He added that some other companies have created products that can also be app-controlled. But Covvi's robotic hand is different because the updates can be sent to an individual device.

One Nexus user is Australian swimmer Jessica Smith. The 2004 Athens Paralympian was born without a left hand. When she was a child, her parents were advised to get her a robotic hand to help with development. But the device caused her to tip over a container of boiling liquid when she was very young. The accident led to serious burns that affected 15 percent of her body.

Smith told Reuters the accident was "the most traumatic event in my life."

But she heard about the Nexus device and decided to give it a try. Knowing it would be an emotional experience, Smith was fitted with the device in April at the age of 37. "I think that I was ready to try something like this," she said.

Smith, who is a speaker and children's book writer, said the device was already creating new movements for her. "I've had a few kids ask if I can do different hand gestures, some polite, some not so polite," she said.

Smith said that if she requests an update for the hand in the morning, the process is completed just a few hours later.

She added that the tech was not just changing her life, it was also changing the lives of her three children. "They think it's amazing and I'm like a half-human-half robot."

Smith added, "I'm not trying to hide who I am. I'm adding and expanding on who I am by being able to access technology that's never been available before."

customer – n. a person that buys goods or services

gesture – n. a movement made with a person's hand, arm, head, etc.