Update Required To play the media you will need to either update your browser to a recent version or update your Flash plugin.
By Gregory Stachel
07 October 2022


Fried foods like French fries and onion rings are going high-tech thanks to a company in Southern California.

Miso Robotics Inc. has released its Flippy 2 robot. The robot automates the process of deep-frying food like potatoes and onions.

The robot uses a large robotic arm like those used in auto plants. It is directed by cameras and artificial intelligence. It takes frozen French fries and other foods out of a freezer, puts them into hot oil, and then places them ready-to-serve into a container. 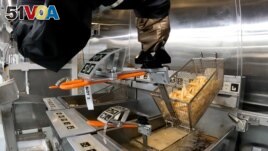 The Flippy 2 robot takes fries out of oil at a lab of manufacturer Miso Robotics Inc in Pasadena, California, on September 27, 2022, in this screen grab from a REUTERS video. (Sandra Stojanovic/REUTERS TV via REUTERS)

Flippy 2 can cook several meals with different cooking processes at the same time. Miso says this reduces the need for employees and speeds up the time for people to get their food at drive-through windows.

Miso Chief Executive Mike Bell said that when an order comes in through the restaurant system, it automatically tells Flippy what to do.

Bell added, "It does it faster or more accurately, more reliably and happier than most humans do it."

Miso said it took five years to develop Flippy. And it recently made the robot available for businesses to buy.

The robot's name comes from an earlier robot named Flippy. Flippy was designed to flip fast-food burgers. But once Miso's team finished that machine, they saw there was a greater need at the fry station, especially late at night.

Bell said people do notice Flippy 2 -- but only at first.

He said when they put a robot in a location, buyers that come up and order, "they all take pictures, they take videos, they ask a bunch of questions and the second time they come in, they seem not to even notice it."

Miso engineers can watch Flippy 2 robots working in real time on a screen. That permits them to deal with any problems that come up. Several restaurant chains have started using the robotic fry cook. Bell said they include Jack in the Box in San Diego, California, White Castle in the Midwest and CaliBurger on the West Coast.

Bell said three other big U.S. fast-food chains have put Flippy to work. But he said they are unsure about advertising it because some people may have opinions about robots taking away jobs from humans.

Bell said the jobs that humans are happiest to offload are jobs like the fry station. He added that workers are happy to have help so they can do other things.

Miso Robotics has around 90 engineers. They work on new technology or work on computer language. One of the company's next projects is Sippy. Sippy is a drink-making robot that will take an order from a buyer and prepare drinks, including preparing things like the lid and the straw.

Bell said that in the future, people will "walk into a restaurant and look at a robot and say, 'Hey, remember the old days when humans used to do that kind of thing?'

automate --– v. to run or operate (something, such as a factory or system) by using machines or computers instead of people to do the work

reliable – adj. able to be trusted to do or provide what is needed

notice – v. to become aware of (something or someone) by seeing or hearing

chain – n. a group of businesses (such as stores, restaurants, or hotels) that have the same name and basic appearance and sell the same products or services