Robots Do It All at Japanese Car Factory

Update Required To play the media you will need to either update your browser to a recent version or update your Flash plugin.
By Dan Friedell
17 October 2021


There are very few human workers at a new Nissan car factory outside of Tokyo. Most of the work is done by robots.

The car maker said the factory should be running in the first part of 2022.

Robots have worked for car makers for a long time. But humans were often needed to examine the quality of the machines' work. Now the machines are smarter. They use data and artificial intelligence to learn from mistakes and make corrections.

Hideyuki Sakamoto is a Nissan Vice President. He gave a tour of the production area in early October.

He said robotic technology has made progress to the point that workers center their attention on maintaining the machines and studying data.

The factory in Tochigi will produce three versions of a car called the Ariya. It will make traditional gas engines, electric engines and a hybrid, which combines electric and gas. 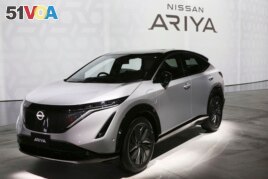 The cars can all be made on the same production line. As the cars move, large robotic arms move cameras along the car surfaces to make sure there are no mistakes. Nissan said the developments at the Tochigi factory are likely to spread to factories around the world in time.

One of the changes has to do with how paint is put on the cars. In the past, car bodies and bumpers on the front and back needed to be painted separately because they are made from different materials. Now, however, the parts can be painted at the same time. The new method reduces energy use by 25 percent.

Another machine in the factory makes a part that is being used instead of rare earth magnets in the electric cars.

Sakamoto said all the new methods should help Nissan save money and to faster deal with changes in the car market and worker availability. The company also needs to meet government requirements for limiting the release of carbon gases linked to global warming.

Nissan expects to regain profitable operations this financial year. But the carmaker faced problems when its former chief Carlos Ghosn was arrested in Japan for financial wrongdoing. Ghosn then fled to Lebanon to avoid trial.

Dan Friedell adapted this story for Learning English based on a report by The Associated Press. Mario Ritter, Jr. was the editor.

What do you think of Nissan's new factory in Japan? Tell us in the Comments Section and visit 51VOA.COM.

tour –n. an activity in which you go through a place (such as a building or city) in order to see and learn about the different parts of it

hybrid – adj. something that is formed by combining two or more things

rare earth – n. involving a set of related elements that have different but useful chemical properties for industry and especially electronics