Lessening Effect of Robots on the Human Work Force

Update Required To play the media you will need to either update your browser to a recent version or update your Flash plugin.
By John Smith
11 March, 2017


Technology activists are appealing to tech companies and their leaders to build a future in which the effect of machinery on humans is lessened.

Some workers have long feared that machines are coming to take away their jobs.

Robots now are doing more work than ever before. Lasers being used to cut cloth at factories, while drone aircraft water crops. 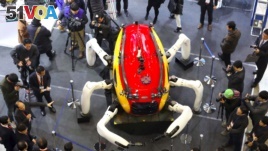 Visitors look at an undersea exploration robot during a drone show at the BEXCO Exhibition Hall in the southeastern port city of Busan on January 19, 2017.

Tim O'Reilly heads O'Reilly Media, a technology advisory service. He says it is important for people and machines to work together. He says most computer software depends on human beings to keep it operating and current.

"It's so important that we have to think about not using technology to replace people -- but to augment them, to do something that was previously impossible," O'Reilly said.

He spoke last week at conference in Ho Chi Minh City. The meeting was a project of the Asia and Pacific Internet Association and APNIC – the Asia-Pacific registry for internet domain names.

With more skills, people can work with machines, O'Reilly noted. For example, the ride-sharing companies Lyft and Uber use software designed to help human drivers. Most large airplanes are now flown by computers. But passengers will likely always want a human pilot on the plane.

Jonathan Brewer is a trainer at the Network Startup Resource Center, a non-profit group based at the University of Oregon. He believes the next step in technology should improve on the one before it.

Speaking at the conference, he noted that when factories began to be built in large numbers, many people were left with undrinkable water and unbreathable air.

Today, Brewer said, technology experts must consider how their inventions can help people. He noted how sensors can warn people an hour before a mudslide takes place. There are other "life-saving devices that cost very, very little money." He added there is not much reason to have machines do difficult work if people are not able to use and enjoy the results of their labor.

O'Reilly said the world needs people. He told the conference's delegates that "all of you, in some sense, are inside the internet. (If) you go away, it stops working. It's not like a piece of software in (the) PC era where if you had a copy of Microsoft Windows running on your personal computer, it would keep running without the original programmers. Almost all of the software we depend on today is a service that depends on the work of people like you."

While some experts believe robots will help in the future, others are worried. In 2015 the consulting service McKinsey & Company said machines will someday perform 45 percent of the jobs humans now do.

That may be why many technology experts support the idea of universal guaranteed earnings. Under the plan, a small monthly payment would be made to each person, even if they do not work.

Brewer hopes that people and machines will continue to cooperate. He said there is technology that tells city workers when street lights need to be repaired or when trash cans are full. That means the workers do not need to examine the lights or cans, as many now do. But he said when the technology tells when repairs are needed or containers must be emptied, humans must still provide the service.

Many delegates at the conference support technology and the changes it will bring. But many are also starting to think about its effect on humans and how to help people live in a world where machines do so much work.

aircraft – n. a vehicle for traveling through the air

software – n. a set of programs and related documentation ties to a system, usually a computer system