Robots in the Field: Farms Turning to Autonomous Technology

Update Required To play the media you will need to either update your browser to a recent version or update your Flash plugin.
By Susan Shand
10 December, 2018


Farmer Jamie Butler is testing a new worker on his farm in England's Hampshire countryside. Butler hopes the new worker will help the 180-hectare farm produce more wheat and not harm the environment.

The laborer does not say a thing while inspecting Butler's winter wheat crop for other plants and insects. Why all the silence? Because it is a four-wheeled robot named "Tom." It uses signals from satellites orbiting the Earth, artificial intelligence and communications technology to map the field.

Tom's creator is the Small Robot Company of Portsmouth, England. It is one of several start-up businesses working to change the way crops are produced.

Farmers are facing economic pressures because of the need to keep down food prices, a rising world population and climate change. Most robots are still being tested, but they show ways that automated machines can move from manufacturing businesses to farm communities.

Holding costs down "by being on the leading edge of technologies as one method of doing that, then that's a really, really good thing," said Jamie Butler. He is one of 20 British farmers taking part in a yearlong experiment.

Next year, the British company plans to start testing two more robots controlled by an artificial intelligence system that will work alongside Tom. It will be doing "seeding, feeding and weeding" without human involvement.

The aim is to cut down on fertilizer and pesticide used to lower costs and increase profits for struggling farmers. This not only helps them economically, but it also lowers the effects of farming on the environment.

"What we're doing is stuff that people can't do," said Ben Scott-Robinson, who helped to set up the Small Robot Company. He noted that his company's robot can inspect each plant and treat its condition as needed, something a farmer cannot do. 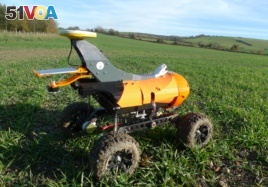 Sales of the autonomous robot system are still years away, with more testing planned for 2021. The tests represent the next step in the growth of automation for farms. Self-driving farm equipment and robotic milking machines have been in use for years. Recently, unmanned drone aircraft began watching crops from the sky.

Soon, farms "will be able to automate...everything," said Tim Chambers, a fruit farmer who is not involved in the tests. Some jobs are harder to automate, such as collecting fruit by hand, but even that is coming, said Chambers, a member of Britain's National Farmers Union.

The United States, Spain, Britain and Belgium all have companies that are developing robots for harvesting fruits such as strawberries, but there are problems.

The main issue "will be the cost of building those robots and the research that has to go into making them," Chambers said. The low cost of air shipping could still make it less costly to fly in fruit from other countries, where labor is also less costly, he said.

To ease financial pressure on farmers who are afraid to make a big investment in equipment, the Small Robot Company plans to sell its services at a monthly cost, charging about $765 per hectare a year.

On Butler's farm, Tom takes hundreds of thousands of pictures of crops during the growing season. The images are fed to Wilma, the artificial intelligence platform, which is being trained to tell the difference between wheat and weeds.

In 2019, the company will start trials for two more robots, Dick and Harry. Dick will provide fertilizer directly to plants. Harry will put seeds into the earth, and there will be no need for tractors.

automate - v. to run or operate something, such as a factory or system by using machines, computers, etc., instead of people to do the work

weed - n. a plant that grows very quickly where it is not wanted and covers or kills more desirable plants

pesticide - n. a chemical that is used to kill animals or insects that damage plants or crops

tractor - n. a large vehicle that has two large back wheels and two smaller front wheels and that is used to pull farm equipment

platform - n. a program or set of programs that controls the way a computer works and runs other programs