Robots Not Ready to Take Over

Update Required To play the media you will need to either update your browser to a recent version or update your Flash plugin.
By Susan Shand
07 April, 2018


Robby Pepper can answer questions in Italian, English and German. He is Italy's first robot concierge. He is deployed at a hotel on the popular Lake Garda to help answer simple, usual questions from visitors.

During one of Robby's first days, Mihail Slanina, a guest from Moldova, congratulated the robot on his skills.

Japan's Softbank Robotics created Robby. The Italian company Jampaa programed the robot. It can provide hotel guests with information they need, like where to find a restaurant and its hours of operation. 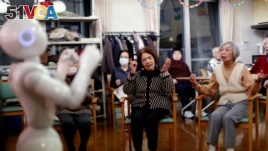 The summer season brings an increased number of visitors to Lake Garda. They will help Robby gain new knowledge and learn to answer more questions.

The use of robots is growing in service industries like tourism. Most of the robots serve mainly as novelties. But they are expected to become more useful as better artificial intelligence, or AI, is developed.

The International Federation of Robotics says about 79,000 professional service robots were sold last year. The Frankfurt, Germany-based organization expects up to 25 percent sales growth each year through 2020. These artificial intelligence machines include defense robots, cleaning robots, and medical robots.

Richard Windsor is a technology businessman in London. He says the use of robots is not yet common because artificial intelligence is not complex enough.

He says the proof is that the companies responsible for the two best AI systems, Google Assist and Baidu's DuerOS, do not make robots.

Windsor says that the "novelty" robots will disappear after people get used to them. New service robots will appear when artificial intelligence improves, he says.

"In order to make these things better, you need to gather data, so you have to be out there," he said.

Public acceptance is important to the robot industry. Experts say people in the United States and Japan seem more welcoming to robots than do people in Europe.

Shoppers at a store in Scotland got one robot, Softbank's Fabio Pepper, dismissed. Customers were not willing to talk to the robot. And a security robot at an office complex in Washington, DC made news last year when it rolled itself into a fountain and would not get out.

In the Italian town of Brescia, the Cayu car store is using another Softbank Pepper robot to sell cars. Named Cayuiki, the robot is programmed to give information on cars, play games, and gather information. Its presence is helping to bring in possible car buyers.

But, Andreas Barchetti, head of the Cayu dealership, said to sell the cars, you still need human beings.

Susan Shand adapted this story for Learning English based on an original report from the Associated Press. Caty Weaver was the editor.

concierge – n. an employee at a hotel whose job is to provide help and information to the people staying at the hotel

novelty – n. the quality or state of being new, different, and interesting

artificial – adj. not natural or real

fountain – n. a structure that sends a stream of water into the air in a garden, park