Update Required To play the media you will need to either update your browser to a recent version or update your Flash plugin.
By Pete Musto
29 March 2020


Istman Simon's factory in western Hungary produces more than one million plastic parts every day. But on a busy morning in one of its large production areas, there is only the sound of machines.

Workers have all but disappeared.

Similar changes are taking place on production lines across Eastern Europe. Rising wages for workers are in conflict with the area's image as a low-cost production base. So factory owners from Hungary to the Czech Republic and Poland find themselves with little choice but to invest in machinery if they want to remain competitive. 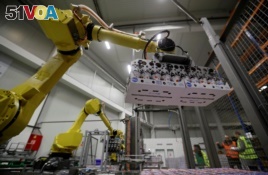 Manufacturing in the area has increased since the European Union expanded eastwards in the 2000s. Since then, companies such as carmakers Audi and Daimler have opened local production lines and the number of parts suppliers has grown. But more recently strong economic growth has led to rising wages and a shortage of workers.

Zoltan Laszlo is a Hungarian labor union leader. He told the Reuters news agency that the use of robot labor has risen notably in the automobile, steel and machinery industries.

"We can see human labor being replaced with machinery and artificial intelligence," he said. "Such investments can already be seen ... leading to job losses."

Employment numbers are one sign Eastern Europe's industry may be at a turning point.

In the Czech Republic, employment numbers showed a year-on-year loss of almost a thousand manufacturing jobs between July and September of last year. This suggests employment in manufacturing could have decreased for the first time since 2013 over the full year.

Peter Simon is chief executive of Simon Plastics, a company his father created 35 years ago. As he watched a line of machines making parts for cars recently, Simon noted there are no human operators.

"Wages are going up, the prices of robots are coming down, so this is the way to get returns," he said. Simon Plastics is hoping to expand production. But pressured by increasing wages and falling prices, all of the company's recent investment of over $3 million was spent on automation.

The company has not yet cut any of its 400 jobs. Its owners have found other positions for those whose work robots have replaced. But the company plans to automate the rest of its physical work after a 50 percent jump in operator wages over the past three years.

Josef Stredula is head of the head of the Czech-Moravian Confederation of Trade Unions. He says the movement toward automation has been a relatively slow one. But he notes that several estimates have shown up to 10 percent of jobs could disappear.

"Big changes are awaiting us," Stredula said. He added that automation might make people less responsible for heavy or repetitive physical work. However, it was important to ease the change, for example by retraining affected workers.

"We have to do everything to make the future not so bleak but relatively easier for everyone," he said.

Employment agency Hays recently noted that the average yearly wage increase in the Czech Republic, Poland and Hungary is around 10 percent. That is far higher than in many western countries. The agency has noted that almost 200,000 Hungarian jobs could be fully automated over the next 10 years.

"It is only a question of when it will be more economical for most companies to start with automation on a much bigger scale," said David Marek, an economist with tax and advisory service Deloitte.

The International Federation of Robotics expects robot sales in major Eastern European economies to increase through 2022. But while the group admits that some jobs will disappear, it does not predict a major effect on employment.

The Reuters news agency reported this story. Pete Musto adapted the report for VOA Learning English. George Grow was the editor. Write to us in the Comments Section or on 51VOA.COM.

straight – adj. following one after the other in order

executive – n. a person who manages or directs other people in a company or organization

automation – n. the act of using machines and computers instead of people to do the work

bleak – adj. not hopeful or encouraging

scale – n. the size or level of something especially in comparison to something else